Plans for a resounding welcome for heroic Baroka 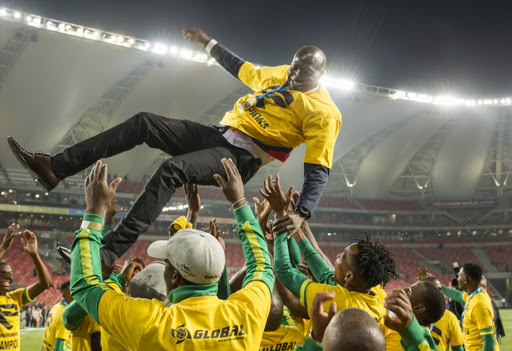 Following their victory in the Telkom Cup in Port Elizabeth on Saturday, Baroka FC will arrive home in Limpopo to a heroes' welcome on Tuesday.

Several activities have been lined up to ensure the team is celebrated for its achievements. Bakgaga, as Baroka are affectionately known, defeated fancied Orlando Pirates in the final to lift the cup. It is the team's first trophy in the PSL.

The game, which ended 2-2 after extra time, was decided on penalties in the Nelson Mandela Bay Stadium.

Chieftainess Sophia Mphahlele of the Baroka-ba-ga-Mphahlele community, from where the team hails, said yesterday they were proud of the team's achievement.

“The whole community is over the moon following the win by Baroka FC. We are busy organising a ceremony to welcome the team and celebrate its achievement. We are proud of them,” Mphahlele said.

She said prior to the team's departure to PE, they made a stopover at the royal kraal where members of the royal family wished them luck.

Provincial MEC for sports, arts and culture, Thandi Moraka, said she was “extremely” happy about the team's achievement.

The last thing Baroka coach Wedson Nyirenda would like to see is his players being “intoxicated” with their Telkom Knockout glory.
Sport
3 years ago

“As Limpopo we are happy that the trophy is coming home, which is a first for this province,” an ecstatic Moraka said.

She said she hoped the trophy would go a long way in strengthening football in rural communities of the province.

According to Moraka, through the engagement of sponsors and other businesspeople, they managed to organise 10 buses to transport fans to go and support the team in Port Elizabeth.

“We knew that through the support of the fans the cup would come to Limpopo. We are also going to take the team through all the five districts of the province to parade the trophy as a way of encouraging the youth to take part in sporting activities,” she said.

Kenny Mathivha, spokesperson for premier Stanley Mathabatha, said they had never doubted that Baroka would lift the cup.

“This cup being the first for a Limpopo soccer team this season means a million words and a million celebrations,” Mathivha said, adding that the team deserved a heroes' welcome.

Like wounded lions‚ Orlando Pirates players are down and out following their 3-2 penalty shootout defeat to Baroka in the Telkom Knockout final.
Sport
3 years ago
Next Article