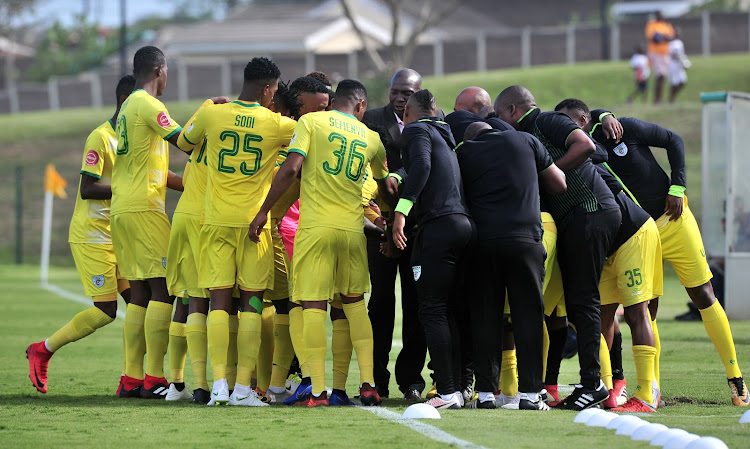 Baroka FC players and huddle together before kickoff against Lamontville Golden Arrows in Durban on November 10 2018.
Image: Samuel Shivambu/BackpagePix

But history tells us that Pirates’ status means little as the club battles to cross the line in cup competitions and has won far too many silver medals in the recent past.

TimesLIVE picks five reasons why Baroka will be crowned champions at the weekend.

The pressure on Saturday will certainly be on Pirates and while Baroka will be desperate to win‚ they do not carry the weight of expectation with many people believing them to be the heavy underdogs.

If Pirates do not lift the trophy they will extend to five years‚ at least‚ their barren run without silverware and it will add to the pressure on coach Milutin Sredojevic‚ who was brought into the club to not only steady the ship‚ but also win trophies.

While there may be no murmurings of discontent yet‚ they will surely start to grow if Pirates lose this final.

And all of that plays into the hands of Baroka‚ who will want to raise those levels of anxiety in Pirates by making sure they don’t concede an early goal.

Baroka will be playing their first game since their Telkom Knockout semifinal against Bidvest Wits on November 25‚ a break of two weeks for the players to refresh both physically and mentally.

By contrast Pirates had that draining Soweto Derby semifinal against Chiefs‚ followed that up with a Caf Champions League first round game against Light Stars‚ a league game against Maritzburg United and then a trip to the Seychelles for the return leg against Stars.

Although Sredojevic did some serious mixing and matching of his players‚ using the full depth of his squad‚ they still would have been hugely disruptive in terms of trying to prepare for the Telkom Knockout final.

In contrast Baroka have had only one thing on their mind and all the time in the world to prepare for it.

Pirates have now gone 15 games unbeaten in all competitions this season and so you can say they are in prime form.

But Baroka have not been top shabby themselves of late‚ with four wins in their last five games and looking more and more confident with each passing week.

Added to that‚ they have won all three Telkom Knockout fixtures this season without conceding a goal‚ and that includes matches against Mamelodi Sundowns and Wits – no easy run to the final.

It is a game against two teams in form‚ but in the recent past Baroka have been able to match Pirates result for result.

And the reality is that they don’t have to win on Saturday – a draw would take the game to the lottery of penalties and then it is anybody’s game.

The first three matches between Pirates and Baroka since the latter won promotion for the 2016/17 season ended in 1-1 draws.

Pirates have had a dismal record in cup finals over the last decade that is likely to leave the side scarred going into Saturday.

Take stalwart defender Happy Jele as an example. He has won only three of the 12 knockout finals he has played for the Buccaneers.

That is a very poor return‚ especially for a club of the stature of Pirates and Baroka can capitalise on those past losses by sewing more doubt.

Remember when Platinum Stars beat Pirates in the 2013 MTN8 final months before the pair faced off in the Telkom Knockout decider? Everybody said lightning would not strike twice but it did.

By contrast Baroka are on the big stage for the first time and can just enjoy the moment.

All the above does not mean much if you don’t have talent and while their perilous league position suggests that Baroka are battling‚ they actually have a lot of quality in their team.

From the excellent Zimbabwe goalkeeper Elivis Chipezese‚ to veteran defender Thabiso Semenya‚ winger Talent Chawapiwa‚ the Botswana international duo of Mpho Kgaswane and Onkabetse Makgantai‚ and the ever-dependable Mduduzi Mdantsane‚ they are a team with a lot of skill.

Not as much as Pirates man-for-man‚ but enough to make them a dangerous opponent under a good coach in Zambian Wedson Nyirenda.

They will be organised‚ work hard and provide glimpses of extreme skill in-between. It will be a tough day in the office for the Buccaneers.

At least 70 percent of the tickets to the Telkom TKO final between Baroka FC and Orlando Pirates have been sold and Premier Soccer League (PSL) ...
Sport
3 years ago

Orlando Pirates attacking midfielder Thembinkosi Lorch has reiterated the club’s stance that they will not underestimate Baroka FC in the Telkom ...
Sport
3 years ago
Next Article