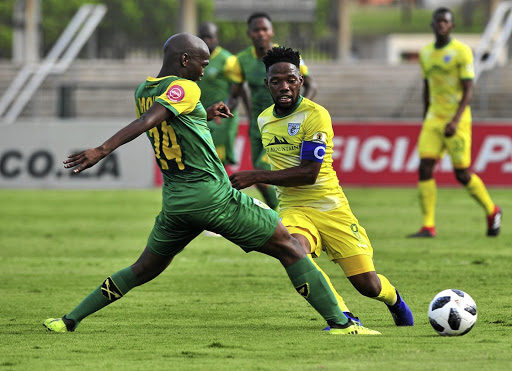 Mduduzi Mdantsane of Baroka and his teammates, come tomorrow, will know that their fans are all behind them, win or lose to Pirates./Samuel Shivambu / BackpagePix

There is a celebratory atmosphere at the home of Baroka in anticipation of a win over Orlando Pirates in the Telkom Knockout final tomorrow, at Nelson Mandela Bay Stadium in Port Elizabeth.

Bakgaga, who are based in Seleteng, GaMphahlele, Limpopo, have impressed die-hard fans, who in their droves, braved the rainy weather to cheer for their team on Wednesday afternoon.

The club has made history in reaching their first final in any competition in their footballing history.

Tebogo Semenya, a die-hard fan of Baroka, side since 2007, couldn't hide his excitement over his team's recent achievement.

"Win or lose at the final, we are with our boys. We have never been so proud of them, they have already put us on the map," Semenya said, as he
laid out the mood of his
fellow fans.

Another fan, Johannes Masipa, expressed his jubilation of the fact that Bakgaga will be playing against what used to be his former favourite team before Baroka were promoted to the top flight.

At least 70 percent of the tickets to the Telkom TKO final between Baroka FC and Orlando Pirates have been sold and Premier Soccer League (PSL) ...
Sport
3 years ago

"I used to support Orlando Pirates before we had a team here in Seleteng. I'm happy to say I left them for these boys and that will be justified on Saturday," Masipa said.

The team's captain Mdu Mdantsane, was so emotional during their last day of training, seeing their supporters off to Port Elizabeth .

"This is incredible. I've never in my football life seen something like this. We will make sure we go out there and surprise the naysayers," Mdantsane said.

Baroka's head coach Wedson Nyirenda has been adamant throughout the week ahead of the encounter that his charges, having knocked out Mamelodi Sundowns and the defending champions Bidvest Wits, will go for a win.

"We are no longer giant killers, but are giants ourselves," the former Zambia international said. - Mukurukuru Media