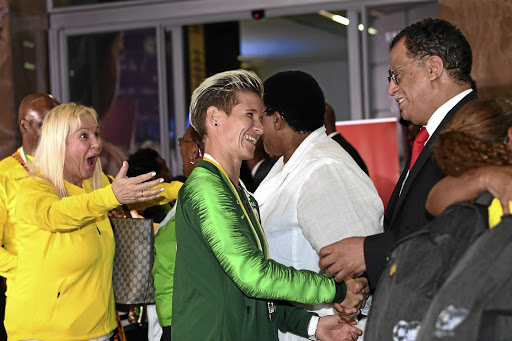 Banyana Banyana captain Janine van Wyk is welcomed by Safa president Danny Jordaan at OR Tambo International Airport in Johannesburg. The team jetted in from Ghana where they lost to Nigeria in the AWC final.
Image: Lee Warren/Gallo Images

Banyana booked their maiden World Cup ticket through finishing as runners-up in the Africa Women's Cup of Nations (AWC). SA were beaten by traditional rivals Nigeria 4-3 on penalties.

The World Cup will be hosted by France from June 7 to July 7 next year. Fresh from dominating the AWC by winning the Golden Boot, with five strikes, and Player of the Tournament accolade, Kgatlana has challenged Safa to arrange them friendlies with top countries.

"For us to do well, it'll take good preparations like we did for Afcon, so it's up to the association to prepare us," said Kgatlana on their arrival at the OR Tambo International Airport, where they received a heroes' welcome on Sunday.

The South African Football Association have rebuffed a once-off R100‚000 pledge from insurance company MiWay towards the successful Banyana Banyana ...
Sport
3 years ago

Having scored the solitary goal to hand Banyana a famous win against Nigeria in the group stages, Kgatlana
still bays for Super Falcons' blood as she wishes to play a friendly with them to prepare for World Cup France 2019.

"It's the first time [going to the World Cup]. I wouldn't say we go there for experience but there are teams that we can play against and challenge them. Nigeria would be good because we never played a friendly with them. We always face them in competitions," noted Kgatlana.

Van Wyk also shared similar sentiments. "The preparations for the AWC were phenomenal. We would like to have the same for the World Cup. We played quality teams such as Chile, that gave us a lot of confidence," said Van Wyk.

The skipper and Kgatlana are the nominees for the Africa Women's Player of the Year awards, while their mentor, Desiree Ellis, is in the running for the Women's Coach of the Year accolade. The CAF awards ceremony is set for Senegal on January 8.