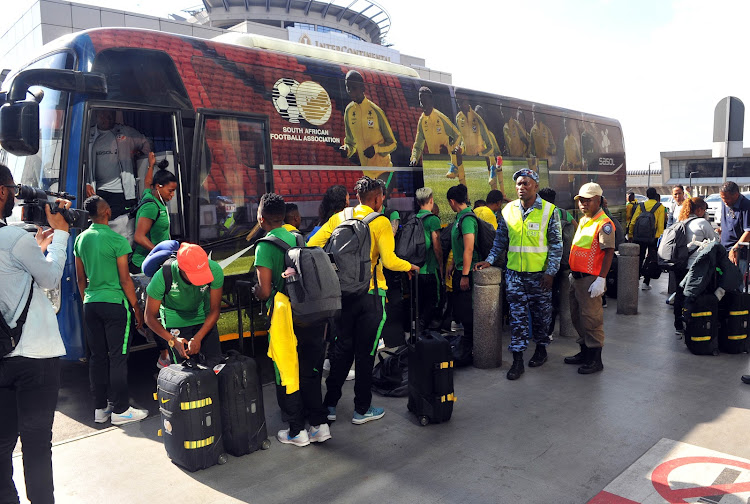 General view of Banyana Banyana arrival at the Airpot during the Banyana Banyana Depature on the 09 November 2018 at OR Tambo International Airpot.
Image: Sydney Mahlangu/BackpagePix

The South African Football Association have rebuffed a once-off R100‚000 pledge from insurance company MiWay towards the successful Banyana Banyana side for their exploits at the African Women’s Championship‚ saying they are seeking only long-term partners for the side.

MiWay made the offer as Banyana finished runners-up at the continental showpiece in Ghana and in doing so qualified for next year’s FIFA Women’s World Cup in France‚ which will be their first appearance at the global finals.

Acting SAFA CEO Russell Paul says that while they are appreciative of the MiWay offer‚ it is not the kind of help they need for the women’s national side.

“By turning the offer down we are saying that while we are appreciative of people making these kinds of offers‚ women’s football can do without handouts‚ they need sustainable offers of support‚” Paul told SowetanLIVE.

“We have a national league starting next year and Sasol has been the only sponsor of this team in the last few years.

"Maybe the intention [from MiWay] is good‚ but it doesn’t satisfy the need in women’s football.”

Paul confirms that SAFA have been trying for a number of years to rope in more corporates into women’s football‚ even with the assistance of Sasol‚ but they have up until now been turned down.

“We have been out there approaching many corporates and Sasol themselves have been at the forefront of trying to persuade other companies to get involved to grow the game in this country.

“But Sasol are still there alone. They are the only ones funding Banyana and the Sasol League.”

MiWay chief executive Rene Otto told SowetanLIVE last week that they were hoping to be a regular sponsor of Banyana in the future.

“We would love to sponsor Banyana Banyana in the future‚” he said.

“Obviously we respect the fact that they have a sponsor (Sasol) at the moment and at the same time we don’t know what opportunities are there."

Paul confirms they have seen a massive spike in the number of registered women’s footballers in the country even as recently as the last two years.

“Women’s sport in general is the fastest growing segment of sport in the country‚" Paul said.

That increased participation and the success of the national side will‚ it is hoped‚ garner more long-term interest in funding the sport in the country.