Calm Baxter to go for kill as win looms large 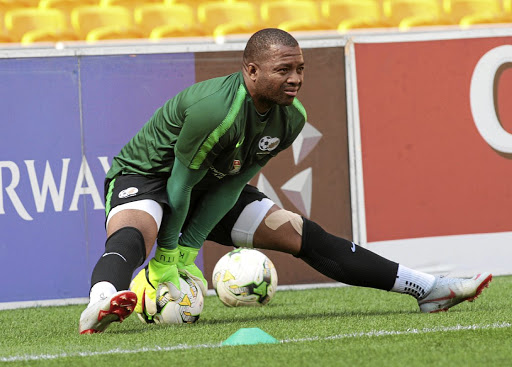 SA's No 1 goalkeeper IItumeleng Khune is expected to provide a solid last line of defence for Bafana Bafana as they face minnows Seychelles at FNB Stadium tomorrow.
Image: Veli Nhlapo

Bafana must win this clash to possibly go top of Group E as Nigeria and Libya are also meeting tomorrow.

Baxter yesterday claimed he had his starting XI in mind before injuries to Thapelo Morena, Vincent Pule and Sibusiso Vilakazi enforced changes. They were replaced by Thamsanqa Mkhize, Thembinkosi Lorch and Gift Links.

"We've got to get on with it, that's the name of the game," Baxter said yesterday's training session at the match venue.

"I don't know at this moment if the team is ready, but they will be ready by the time we get to the game.

"I think they've done a lot of hard and some good work. But one thing we've found challenging is the fact that a lot of the players have come off a really heavy period with the PSL. So, we've got to try to strike that balance and you can't run the legs off or else they would be going into the game not fresh," Baxter stated.

"We think we've done okay with that and that's why Kamo (Mokotjo) did not play on Tuesda,y for example, because he's had a heavy schedule there [at English Championship side, Brentford]. So we have to try to be a little bit smart, but the players have certainly approached it in the right spirit."

Bar the players who are not available, Baxter is likely to field most of the players who featured in the goalless draw against Libya at Moses Mabhida Stadium last month.

Goalkeeper Itumeleng Khune is set to retain his place along the likes of Ramahlwe Mphahlele, Sifiso Hlanti, Thulani Hlatshwayo and Buhle Mkhwanazi in defence.

Central midfielders Dean Furman and Mokotjo would probably start, with Percy Tau up front, where he's likely to be joined by Lebogang Mothiba.

It's at wings where it's not clear at this stage who Baxter may start with. All the candidates such as Lorch, Links, Lebohang Maboe and Phakamani Mahlambi are raring to go. Baxter, though, hinted at Links featuring in the return leg on Tuesday