Time for Mokotjo to prove he is worthy of the Bafana jersey? 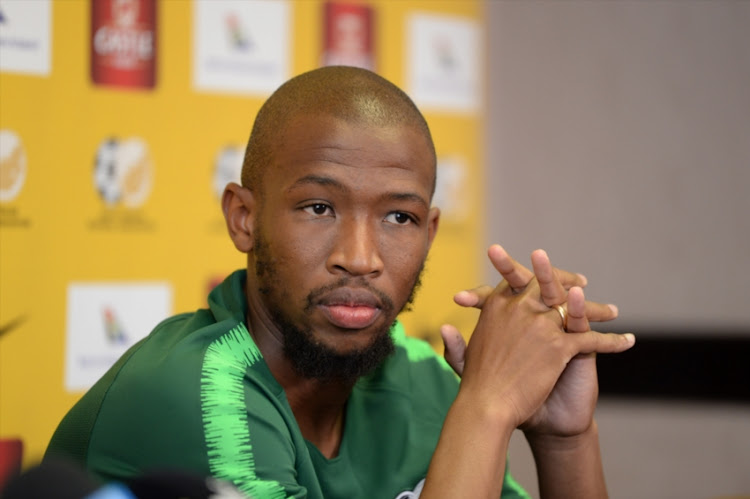 Bafana Bafana midfielder Kamohelo Mokotjo has urged his teammates to focus more on their game than anything else in their crunch back-to-back Africa Cup of Nations qualifiers against minnows Seychelles.

Bafana meet Seychelles at FNB Stadium on Saturday‚ then travel to the Indian Ocean islands for the second match in Victoria on Tuesday.

Mokotjo‚ who plays for Brentford in England’s Championship‚ said focusing on polishing their strengths will help Bafana to get the six points they need to almost confirm their qualification for next year’s Afcon in Cameroon.

Bafana beat Nigera 2-0 in their first qualifier in Uyo in June last year but came under much criticism after playing to a goalless draw at home against Group E leaders Libya‚ another team considered minnows in this group‚ in Durban last month.

“I think we will be more focusing on our team and not our opponents‚” said the 27-year-old midfielder.

“I think the best way to get the best out of South African players is when we focus on ourselves.

“Other than that we know that the game against Libya was a draw‚ not a loss. It wasn’t the best result but we do know that we could have done much better.”

Producing a better result should start from an improvement from Mokotjo who‚ despite being given ample chances to play for Bafana by coach Stuart Baxter‚ is yet to deliver an unforgettable performance in the country’s jersey.

Playing against a team ranked 189 in the world and having already been beaten 5-1 by Libya and 3-0 at home by Nigeria should provide good reason for Mokotjo and many of his teammates to deliver an emphatic result against Seychelles on Saturday.

“Playing at FNB is always nice. It is great pitch to play on and it’s a nice stadium‚” said Mokotjo‚ who was part of the team that beat Burkina Faso 3-1 in a World Cup qualifier last year – the last time Bafana played a competitive match at Soccer City.

“I don’t think we have anything to complain about in this camp. Everything is all set for us to go perform.”

Mokotjo urged the fans to come in their numbers as Bafana look to wrap up the qualification with two victories against the Indian Ocean islanders.

“I think having the fans at the stadium affects the players in a good way‚” Mokotjo said.

“We play for the fans. Of course it firstly is about the results and getting a good performance.

“Most of the time it is about shutting all the external things out so that you can focus on what you have to do on the pitch. But yes‚ we need the fans. We play for them.”

Bafana will play Seychelles at 3pm on Saturday and then travel to Victoria to meet the islanders at the Stade Linite‚ a tricky venue that has an artificial turf and accommodates 10 000 fans.