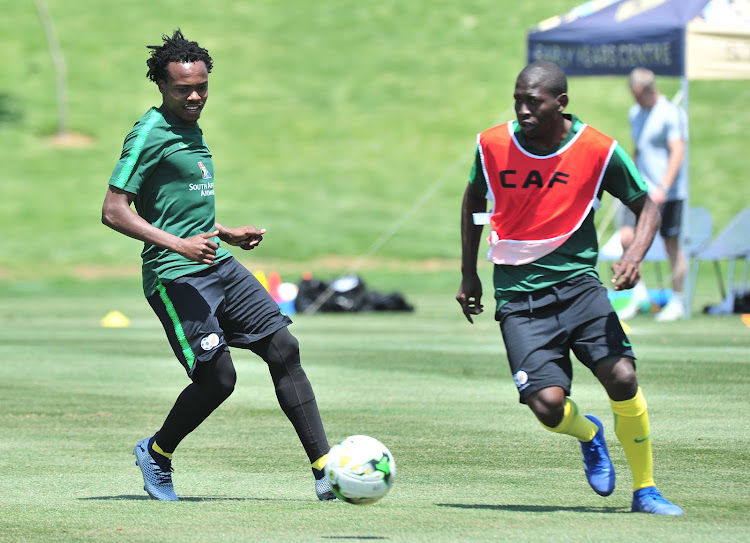 Percy Tau relishes the prospect of playing alongside the French-based‚ on-form Bafana Bafana striker Lebo Mothiba up-front for SA against Seychelles on Saturday.

The pair are likely to form a dream front line partnership in Bafana’s 2019 Africa Cup of Nations (Afcon) qualifier at the FNB Stadium.

Mothiba has five goals in Ligue 1 this season‚ where he transferred to Racing Strasbourg from Lille for a reported R135m in late August‚ and scored a stunning brace on the weekend in a 2-2 away draw against Angers.

Tau scored his second league goal for Royal Union Saint-Gilloise in Belgium’s second division this weekend‚ where he has been loaned after signing for English Premier League side Brighton & Hove Albion.

Speaking after a gruelling one-and-half-hour training session in Johannesburg on Tuesday‚ Tau said having big centre-forward Mothiba should boost Bafana’s chances of an emphatic result in the back-to-back matches against Seychelles.

“I think the coach chooses who to play with‚” said Tau when asked about the prospect of partnering Mothiba.

“I think Lebo [Mothiba] has been playing well in France. He also did well when we got to play together for Bafana against Zambia.

“I’m happy that he’s here now and hopefully he will be a good addition to the team.

Bafana Bafana striker scored a brace recently for his Lique1 club Raceing Strasbourg against Angers SCO in a 2-2 draw.

The 22-year-old Mothiba scored on his debut against Angola in the four nations friendly tournament played in Zambia in March‚ and also scored in a 2-0 win against Zambia in the final of that tournament.

Mothiba was called up to Bafana’s second qualifier against Libya in Durban last month but pulled out because of injury. Tau said Mothiba was not the only player sorely missed by SA their 0-0 draw.

Tau said he was confident that Bafana will be one of the two teams progressing from Group E to qualify for the 2019 Afcon in Cameroon.

“It’s still too early because there are still four matches to play. We are second on the log and I don’t see any problem there‚” he said.

“Sometimes you have to be smart on how you see the group and analyse it. In a group the end results are also influenced by other results in the same group.

“So we can’t be putting pressure on ourselves now. We just have to do our best and make sure that we put the country where it is supposed to be.”

Bafana have four points from beating Nigeria 2-0 away‚ then the draw against Libya.