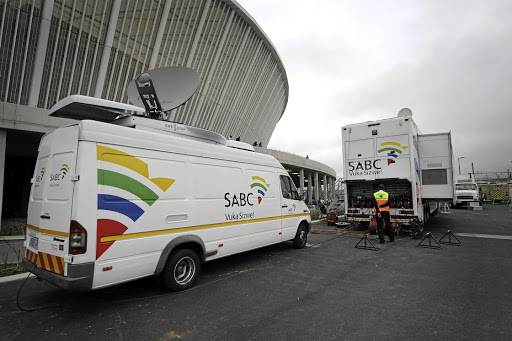 Safa and the SABC have failed to sign a broadcast rights agreement.
Image: AMA/Corbis via Getty Images

The SA Football Association (Safa) has confirmed it has cut ties with national broadcaster SABC, resulting in a blackout of all Bafana Bafana and other national team matches.

The SABC will not televise Bafana's 2019 Africa Cup of Nations qualifier against the Seychelles at FNB Stadium tomorrow. The match will also not be broadcast on radio but the SABC insisted it will carry Tuesday's return leg as Safa doesn't own the rights.

Safa yesterday painted a picture of strained relations between the two bodies.

"Safa wishes to announce that as matters stand, the upcoming Afcon matches for Bafana as well as international matches for Banyana Banyana will not be broadcast on any of the SABC platforms," it said in a statement.

The federation lashed out at the SABC for making a "discourteous offer" on a new deal after opening the discussion in October 2017.

Safa took a swipe at the deals the SABC has recently concluded for the rights for the English Premiership and the T20 League, which are worth millions despite claims that the SABC was cash strapped.

But Sowetan has been told that the SABC's failure to conclude a contract with Safa is due to the financial strain broadcasting the games on radio and TV carries.

"We don't make money from showing Bafana games," the insider said. "We are expected to pay R110m per year on the games, but we only make about R10m from all those games. It makes no financial sense for us to hold these rights."

Safa, meanwhile, claimed that it allowed the broadcast of the match between Bafana and Libya in August to be televised for free in the belief that both parties were close to concluding a deal.

"It is common cause now that Safa, in good faith, allowed the broadcast of the last Afcon qualifier against Libya to be broadcast by the SABC, despite there being no contract in place."

In response the SABC said it was prepared to negotiate with Safa. "The SABC is prepared to broadcast the remaining 2019 Afcon qualifiers. (We) remain committed to engaging Safa on fair terms," said spokesperson Neo Momodu.