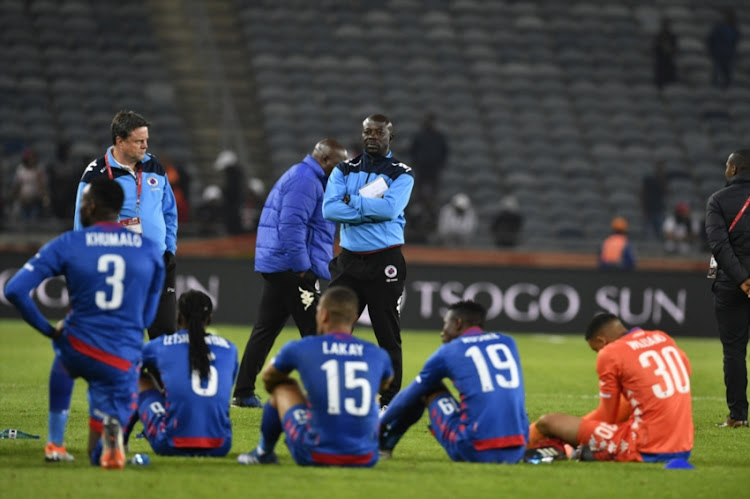 A crushing 4-0- triumph for SuperSport United against Black Leopards on Sunday has left coach Kaitano Tembo with a selection dilemma as he ponders his tactics and line-up for Saturday’s MTN8 final against Cape Town City in Durban.

Several fringe players made strong cases for selection as the club beat Leopards in Atteridgeville and Tembo admits it is going to be tough to decide the starting XI for the final at the Moses Mabhida Stadium at the weekend.

“We will do our recuperation on Monday and see who is available and give the guys a little bit of time off as well‚ but you can see I have a headache!

“A lot of players are raising their hands‚ so it is going to be a little difficult‚” said Tembo.

“We are going to really have to take time and think about our tactics on the day‚ how we are going to approach the game against Cape Town City.

"That will determine who starts and who sits on the bench.”

Three areas which are obviously a dilemma for him are in midfield where he must choose between Reneilwe Letsholonyane or Teboho Mokoena.

Out on the right wing‚ Tembo also has a difficult choice between the pace of Fagrie Lakay or the experience of Thuso Phala.

Bradley Grobler sat out Saturday's game with a small groin niggle‚ allowing James Keene to score twice against Leopards and stake his claim for a starting berth in attack.

One of them was a superb flying header which set SuperSport on the road to an easy win over Leopards.

Tembo rested Grant Kekana at right back because he had three yellow cards but took a gamble on captain Dean Furman‚ who was in the same position and who played on Sunday risking suspension.