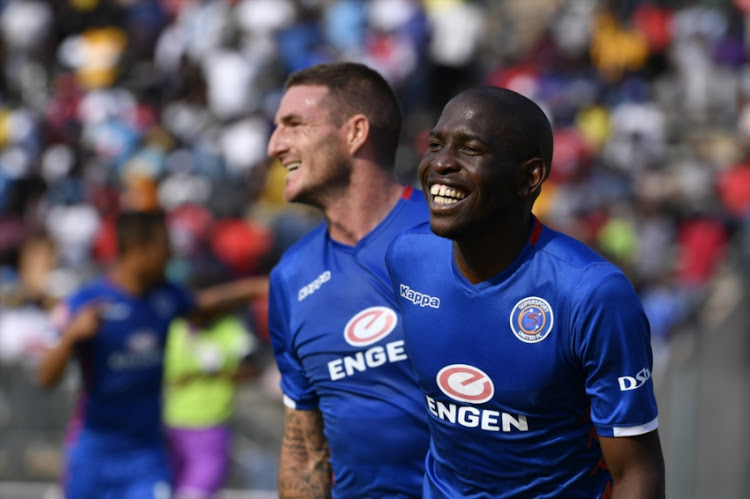 SuperSport United warmed up for the weekend’s MTN8 final with a comfortable 4-0 home win over Black Leopards in the Absa Premiership at Atteridgeville on Sunday, giving themselves a morale boost before they take on Cape Town City in Durban.

James Keane scored after just 72 seconds to give the hosts the perfect start against the unpredictable Leopards and Aubrey Modiba added a second just past the half-hour mark.

Evans Rusike added a third after nicking possession and then tucking it away with some aplomb in the 70th minute and was one-on-one with the goalkeeper for the fourth goal, which Keane finished after Rusike’s path was blocked.

It started early with Keane powering in a superb diving header at the end of Fagrie Lakay’s cross for the opener, quickly followed by two more chances for Lakay and Evans Rusike.

Keene might have had a second in the 14th minute but defender Nyiko Sibanda blocked his shot from going in with goalkeeper King Ndlovu already beaten.

Then Leopards captain Marks Munyai inadvertently headed against his own crossbar all this before the 20-minute mark.

Black Leopards were again entertaining in their attacking approach but far too naïve for this level of the game and will have to rethink their strategy if they are to avoid finding themselves in trouble near the foot of the table later on in the campaign.

They won their opening encounter of the season but have not been victorious since and are already languishing in the basement.

Their fullbacks push up too high and were rerated caught as SuperSport played the ball behind them, stretching the central defenders and setting up a myriad of chances.

Kaitano Tembo’s side could have, perhaps, been four or five goals up at half-time although Leopards did create chances of their own with the best coming when Ronwen Williams denied Themba Ndlovu in the 35th minute.

Ndlovu made a clever turn midway through the second half to set up another shot for himself again test Williams but soon after Rusike broke away to score the third.

The fourth goal came with just four minutes left and proved a cherry on a tasty cake.