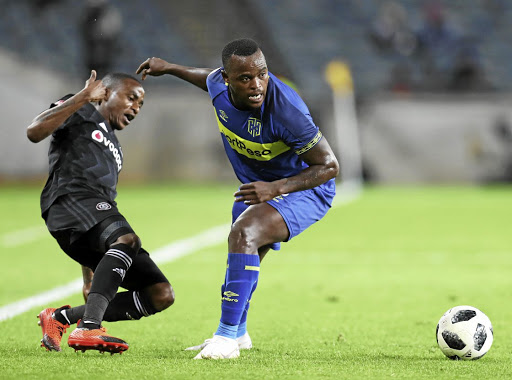 Thembinkosi Lorch of Pirates and Ayanda Patosi of City during their match on Wednesday.
Image: Muzi Ntombela/BackpagePix

Cape Town City will be boosted by their fightback in their midweek 2-2 draw against Orlando Pirates ahead of the MTN8 final on September 29.

The Citizens were in Orlando on the back of a 4-1 hammering by Kaizer Chiefs in their own backyard last weekend. It was already looking bleak for them against Pirates in Soweto when they were 2-0 down at half-time after Bucs scored through Augustine Mulenga and Innocent Maela. The Cape side, however, fought back to earn a draw courtesy of a brace by Ayanda Patosi.

The fighting spirit would augur well for City, who face SuperSport United in the Wafa Wafa decider at Moses Mabhida Stadium in Durban.

City assistant coach Vasili Manousakis was in charge in the absence of head coach Benni McCarthy, whose wife Stacy was in hospital.

McCarthy's message to the team before their departure for Gauteng was clear: "Fortune favours the brave."

And while City had their backs against the wall in the first half, they showed character to bounce back.

"All the communication [with McCarthy] happened beforehand . there were no halftime chats [on the phone]," Manousakis said.

The other positive for City from the match was how Patosi showed class and played his first full match this season to end talk, even for a few days, about his fitness issues.

Cape Town City have no further matches until the final, while SuperSport United will host Black Leopards at Lucas Moripe Stadium on Sunday [3pm].