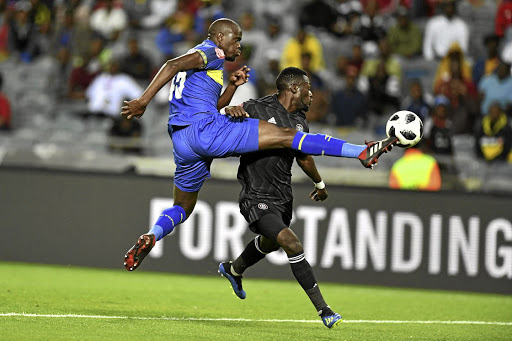 Kwanda Mngonyama of Cape Town City wins the ball ahead of Pirates' Augustine Mulenga during their Absa Premiership match at Orlando on Thursday.
Image: Lefty Shivambu/Gallo

It was a game of two halves as Orlando Pirates were held to a 2-2 draw by Cape Town City here last night.

Augustine Mulenga and Innocent Maela ensured a 2-0 lead for the Buccaneers at the break, but Pirates' tormentor in chief Ayanda Patosi scored a second half brace for the share of the spoils.

City were already on the backfoot after arriving in Gauteng without their head coach Benni McCarthy, who had to attend to his hospitalised wife Stacy. She was admitted with a collapsed lung.

Defender Taariq Fielies was also missing for City through suspension and they felt his absence just eight minutes from the first whistle.

Ayanda Patosi has pulled one back for Cape Town City as they look to upset Orlando Pirates.

Mulenga received a great pass from Thembinkosi Lorch and with his left foot, fired past Peter Leeuwenburgh eight minutes on the clock.

Liked a dazed fighter in a boxing ring, City were on the ropes when the home side came knocking again in the 15th minute and from a corner, Maela headed home to extend their lead.

On the other hand, Bucs goalkeeper Siyabonga Mpontshane had little to do in a half that his side dominated and wasn't really tested until the break.

But City refused to throw in the towel as they staged a fight back in the second half.

Pirates' tendency to allow the opponents a lot of time on the ball when they are leading was their undoing.

While Pirates sat back most time and protected their lead, City went on the offensive with Patosi leading the charge.

City's Riyaad Norodien's attempt was over the bar early after the interval and could have served as a warning, but Pirates went to sleep and Patosi fired home to reduce the deficit in the 68th minute.

Barely 10 minutes later Patosi was back at it when Pirates failed to defend his free kick and instead the defence impeded Mpontshane, who was hapless as the ball found its way into the net for the equaliser.

Pirates could have stolen it towards the end, but substitute Linda Mntambo missed a sitter with a wild strike.

City will now turn their focus to the MTN8 final against SuperSport United on September 29, while Pirates will travel to Polokwane to face Baroka on Saturday.