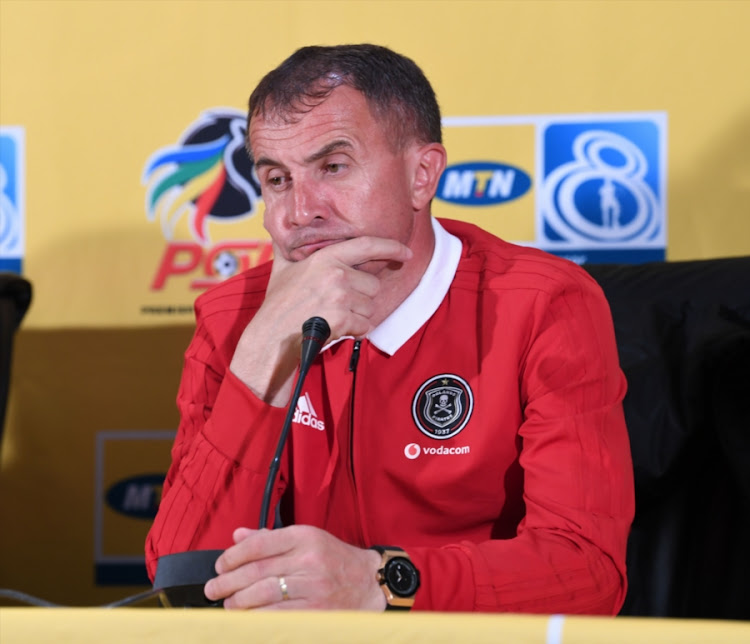 Orlando Pirates Serbian coach Milutin Sredojevic speaks to the media during a press conference ahead of their MTN8 quarterfinal match against SuperSport United at the PSL Offices on August 09, 2018 in Johannesburg, South Africa.
Image: Lee Warren/Gallo Images

Orlando Pirates coach Milutin Sredojevic has reminded his players that “in football you have no time to relax”‚ following his team allowing Cape Town City to come back from two goals down for a 2-2 Absa Premiership draw.

Pirates will turn their attention to Baroka FC on Saturday at Peter Mokaba Stadium (kickoff 3pm)‚ where Sredojevic will be looking for a far greater killer instinct from his team.

They could have been going into their next game on the back of three wins in a row had they not allowed Ayanda Patosi a second-half brace at Orlando Stadium on Wednesday night.

Bucs had also allowed SuperSport United back into their previous game when Bongani Khumalo scored a 69th-minute equaliser at Orlando on Saturday‚ but late goals by substitute Thembinkosi Lorch and Ben Motshwari secured a 3-1 victory.

Against City‚ Pirates appeared a little overconfident at 2-0 up‚ turning on the style at times when closing up would have been advisable‚ as the Citizens appeared to cave in again after having taken a 4-1 thrashing at home to Kaizer Chiefs five days previously.

Patosi gleefully took advantage‚ first with a gem‚ collecting Ntsikelelo Nyauza’s weak header on his chest and volleying a beauty past Siyabonga Mptontshane in the 69th minute.

The forward’s second in the 77th had a touch of fortune to it‚ as a swerving low cross eluded everyone‚ including Mpontshane.

“I guarantee that all of us have been aware that we have been punished by the game of football‚” Sredojevic said afterwards.

“And we need to understand that emotionally we need to control and have far better match management.

“The game needs to be played to the last minute. We cannot relax. We need to give respect to every moment.

“From when we scored the first goal‚ from that moment we were thinking that things would come our way.

“However‚ in the second half the opponent was not defending that much high‚ the way we were expecting. We still played those balls and whenever we tried to penetrate we succeeded.

“However‚ we got punished from that set piece. And simply we have learned a lesson‚ and we need to go back to the drawing board and learn that in football you have no time to relax.”

Baroka are struggling in 13th place from a win‚ two draws and three defeats.