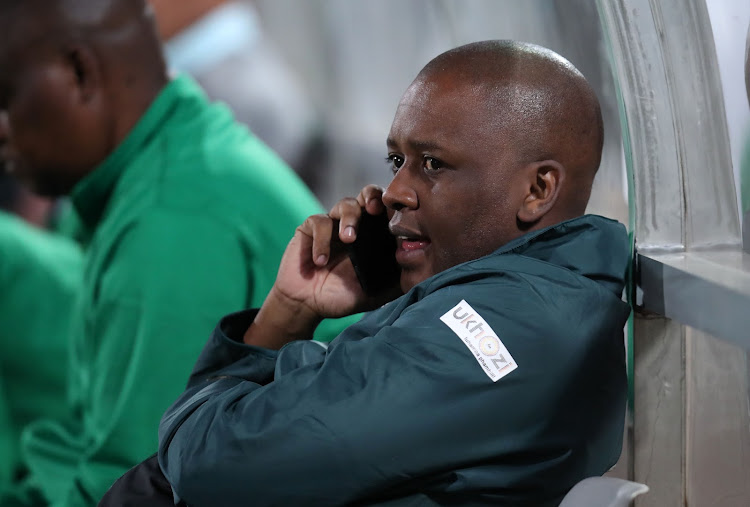 AmaZulu acting chairman Lunga Sokhela speaks on the phone during the Absa Premiership match against SuperSport United at Lucas Moripe Stadium in Atteridgeville, west of Pretoria on August 8 2018. Sokhela says Fifa are "heartless people and the biggest bullies who think they are the supreme law of the world.
Image: Muzi Ntombela/BackpagePix

The SA Football Players Union (Safpu) has called on Safa to enforce a Fifa ruling that ordered AmaZulu to be deducted six points and fork out over R1-million in compensation and fines for defying a decision of the Court of Arbitration for Sport (CAS).

AmaZulu were found guilty by the Fifa Disciplinary Committee (DC) for failing to comply with a decision passed by CAS on September 13‚ 2017 regarding an employment-related dispute between Namibian player Phineas Nambandi and the Durban club.

Nambandi‚ through Safpu‚ took AmaZulu to Fifa in July 2014 after the club terminated his contract‚ which still had three more years to run.

After more than a year of unsuccessful attempts by Safpu to get AmaZulu to pay out the player‚ the union reported the club to Fifa in June 2016. Nambadi initially wanted a R300,000 settlement as he was struggling to meet his financial obligations following the termination of his contract but AmaZulu still refused.

Fifa ruled in favour of Nambandi in September 2017.

According to the Fifa Disciplinary Committee ruling seen by SowetanLIVE‚ AmaZulu were ordered to pay‚ among others: “R1‚086m as compensation for breach of contract within 30 days from the date of notification of the decision plus 5% interest per annum‚ as from 25 July 2014.”

AmaZulu were also ordered to pay costs and expenses incurred in connection with the arbitration proceedings.

The Durban club appealed to CAS for a final and binding arbitration and‚ 12 months later lost the case as the court upheld the Fifa ruling.

When AmaZulu seemingly ignored the CAS decision‚ the matter was then sent back to the Fifa Disciplinary Committee.

The committee handed down a final judgment on August 10‚ 2018 and gave AmaZulu until September 16 to settle their debt with the player.

AmaZulu acting chairman Lunga Sokhela last week vowed in an interview on Radio 2000 that the club will not pay any money to the player and true to his word‚ the club missed the Sunday‚ September 16 deadline.

“In the letter that we wrote to Safa we called on them to do the right thing which is to order the PSL to deduct the points‚” said Gaoshubelwe.

Safa acting chief executive Russell Paul confirmed on Wednesday that he had received the Fifa ruling.

“I’m not in a position to comment at the moment until the association has fully studied the ruling. Phone me in a few days and maybe I can be able to give you a comment‚” said Paul.

Gaoshubelwe said there is no need for Safa to study the Fifa ruling.

“The ruling is clear‚ final and binding. Safa must now instruct the PSL to deduct six points from AmaZulu and still settle their debt with the player‚” Gaoshubelwe said.

AmaZulu’s apparent defiance of Fifa throws Safa into a tailspin as it forces the association to enforce the ruling or face expulsion itself.

“If the South African Football Association does not comply with this decision‚ the Fifa Disciplinary Committee will decide on appropriate sanctions on the member. This can lead to an expulsion from Fifa competitions‚” warns the Fifa DC in its ruling.

AmaZulu acting chairman Sokhela was adamant his club will not pay a cent to anyone and that no points will be deducted from them. He said he has been “writing letters to Fifa long before the deadline came to pass and never got a single response”.

Sokhela told SowetanLIVE he had contacted officials at Safa and told them the club’s position.

“They Safa officials‚ like us‚ told me they are going to try and get clarity from Fifa. Until that is done basically nothing can be done‚” Sokhela insisted.

Sokhela argued that the player was employed by AmaZulu Football Club Pty Ltd‚ which no longer has an interest in football.

He said the company that currently owns AmaZulu FC as a football club that is playing in the Absa Premiership is Lyrastar Investments‚ which has no association with AmaZulu Football Club Pty Ltd.

“We’ve never had any dealings with Nambandi as Lyrastar. The guy [Nambandi] had dealings with AmaZulu Football Club Pty Ltd‚ which is a company that is no longer in sport‚” said Sokhela.

A Durban man says he is pressing ahead with a case of assault against Mamelodi Sundowns coach Pitso Mosimane.
Sport
3 years ago

Durban police say they are in no rush to speak to Pitso Mosimane after a case of assault was opened against the Mamelodi Sundowns coach at Umlazi ...
Sport
3 years ago
Next Article