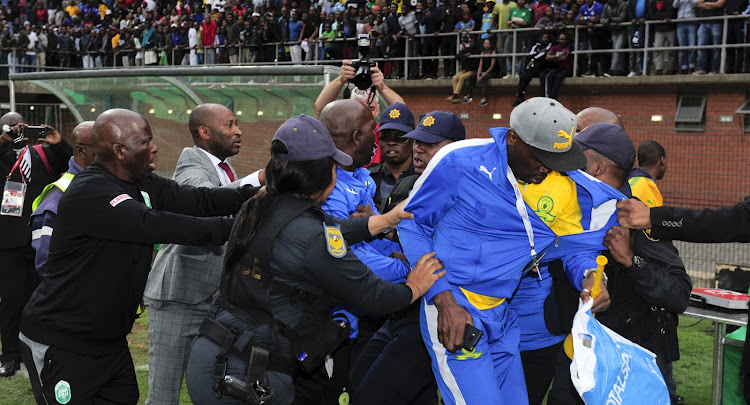 Mamelodi Sundowns coach Pitso Mosimane at the centre of scuffle broke broke out between Mosimane and the head of the security company (not in this picture) that does duty for AmaZulu FC's home matches following an Absa Premiership match at King Zwelithini Stadium in Umlazi, Durban, on Sunday September 16 2018. Sundowns' team manager Peter Ndlovu (wearing a red tie) is seen trying to pull the coach away.
Image: Gerhard Duraan/BackpagePix

Durban police say they are in no rush to speak to Pitso Mosimane after a case of assault was opened against the Mamelodi Sundowns coach at Umlazi Police Stadium on Sunday.

Nathi Ngwenya of Ngwelela Security Services‚ a private company that provides security at KwaZulu-Natal premiership side AmaZulu’s home matches‚ alleged that Mosimane landed a blow to his head at the end of a match between AmaZulu and Sundowns at King Zwelithini Stadium on Sunday.

“No one has been arrested‚” Zwane said.

“Even when we get to court it will depend on how busy the prosecutor is.

"There are many cases he’s dealing with.”

The alleged assault happened after the referee had blown his final whistle following a thrilling Absa Premiership match that ended in a 3-3 stalemate.

Sundowns fans reportedly ran onto the field after the game and Mosimane was not pleased with the way the security personnel removed them‚ and that is when the alleged assault is believed to have happened.

Ngwenya confirmed to SowetanLIVE on Tuesday that he opened the case against Mosimane on Sunday after the game.

“The prosecutor can take up to three weeks to make a decision because there are many dockets in front of him‚” said Zwane‚ adding that arresting a suspect depends on the circumstances of the case and how busy the prosecutor is.