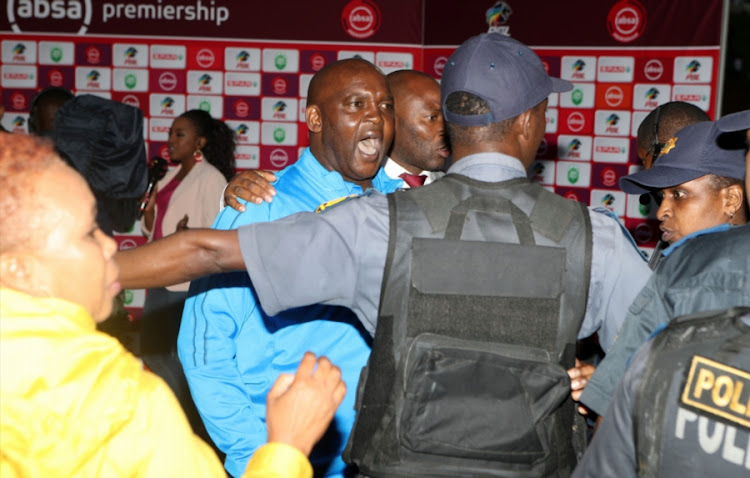 Mamelodi Sundowns' coach Pitso Mosimane had to be held back by police after being involved in a physical altercation with security personnel following the Absa Premiership 3-3 draw against AmaZulu at King Zwelithini Stadium in Umlazi on Sunday September 16 2018.
Image: Steve Haag/Gallo Images

A Durban man says he is pressing ahead with a case of assault against Mamelodi Sundowns coach Pitso Mosimane.

Nathi Ngwenya of Ngwelela Security Services‚ a private company that provides security at KwaZulu-Natal Absa Premiership side AmaZulu's home matches‚ has alleged that Mosimane landed a blow to his head at the end of a match between AmaZulu and Sundowns at King Zwelithini Stadium on Sunday.

The alleged assault happened after the referee had blown his final whistle after a trilling league match that ended in a 3-3 stalemate.

Sundowns fans reportedly ran onto the field after the game and Mosimane was not pleased with the way the security personnel removed them‚ and that is when the alleged assault is believed to have happened.

Ngwenya confirmed to SowetanLIVE that he opened the case against Mosimane on Sunday after the game.

“Yes I can confirm that I have opened a case of assault against Mosimane‚” Ngwenya said on Tuesday.

“Unfortunately I can’t get into the main details of the case because I have handed everything to the police.

“I don’t want to divulge any information that might jeopardise this case now.”

Sundowns spokesman Thulani Thuswa said the club has not yet officially commented on the matter but they might issue a statement later on Tuesday after getting all the details.

KwaZulu-Natal police spokesperson Lt-Colonel Thulani Zwane confirmed that a case of assault has been opened against Mosimane at Umlazi Police Stadium and police were investigating the matter.

He added that no one has been arrested yet.

Sundowns are still in Durban as they play another league match in the city‚ this time against AmaZulu's neighbours Lamontville Golden Arrows at the Princess Magogo Stadium in KwaMashu.

The Brazilians have started the season slowly and they only managed four wins in their last 17 matches stretching from last seaon.