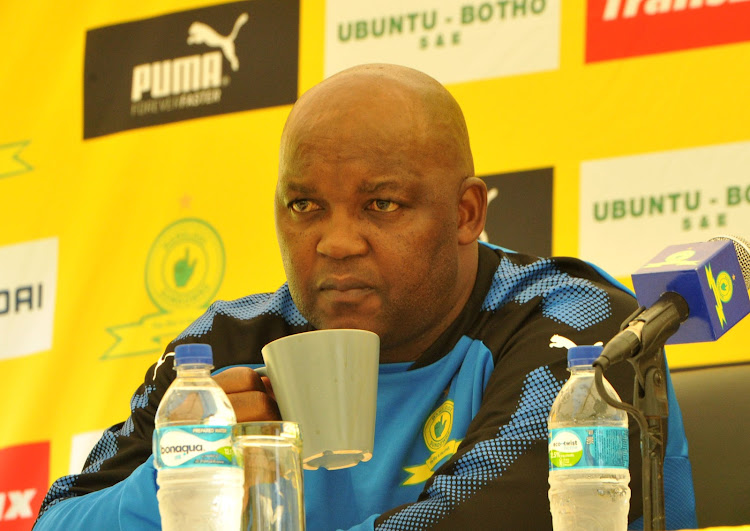 Pitso Mosimane tried to hide his frustration at SuperSport United’s defensive counterattack strategy that was effective holding Mamelodi Sundowns to a 1-1 Absa Premiership draw at Lucas Moripe Stadium on Saturday night‚ but eventually something had to give.

Sundowns struggled to break down that structure‚ and had to be constantly wary of a lightning counter where midfield trio Dean Furman‚ Reneilwe Letsholonyane and Teboho Mokoena were highly effective recycling the ball forward‚ and Rusike and Mnyamane a handful upfront.

Tinkler’s description of it was: “It was bus in defence‚ but it was a Ferrari in attack.

"He (Mosimane) wasn’t prepared for the Ferrari.

"You can complain about the bus‚ but‚ ja‚ prepare yourself for the Ferrari”.

Mosimane was initially irritated‚ then gradually more incensed‚ by the statement.

In his post-match press conference that followed Tinkler’s he said:

“He has to come out of relegation first to talk about Ferraris.

“Where are the Ferraris. They lost to AmaZulu here.

“And he’s lucky he didn’t get a penalty against him‚ because Percy Tau was fouled.

“No‚ I mean‚ what Ferrari? He must manage his programme for Africa – I’m waiting to advise him.”

Mosimane was asked about SuperSport managing to catch Sundowns‚ seemingly trying to play an uncharacteristic offside tactic in defence‚ square on a few occasions.

“No‚ we want to win. We are the aggressors‚" Mosimane said.

“So you are happy that I must play five at the back‚ like these guys?

“You know what you will write? About the counterattack of Rusike and Thuso (Phala). That’s your summary for the whole match.

“With us‚ I can tell you about Percy‚ about Themba Zwane‚ about ‘Vila’ (Vilakazi) carrying the whole team‚ about Gaston Sirino trying to find angles‚ about Thapelo Morena’s overlaps.

"I think you can write a good story on that.

“I go to Zamalek in the Champpiojns League final and play the high line.

“How can he talk about a Ferrari when they scored from one long kick out of defence?” he queried.

Mosimane went on to say: “From (previous SuperSport coaches) myself‚ Gavin (Hunt) and Cavin (Johnson)‚ I have never seen SuperSport go as low as this. And you can quote me on that.”

Eleventh-placed SuperSport dropped as low at one stage this season and flirting with the relegation zone.

For the most part Mosimane had kept his cool even after another team‚ and this not a small side‚ but SuperSport – albeit a struggling‚ mid-table Matsatsantsa – “parking the bus” against his side.

But the news of Tinkler’s Ferrari comment sparked something‚ and Sundowns’ coach then seemingly could not contain himself.

The Premier Soccer League’s (PSL) arbitration over Tendai Ndoro’s eligibility will only be heard on March 26.
Sport
4 years ago

The Premier Soccer League have written a letter to Cape Town City coach Benni McCarthy asking him to explain his comments made about match officials ...
Sport
4 years ago

Kaizer Chiefs defender Teenage Hadebe has admitted that the Premier Soccer League has been a big step up for him‚ with the game in South Africa ...
Sport
4 years ago
Next Article