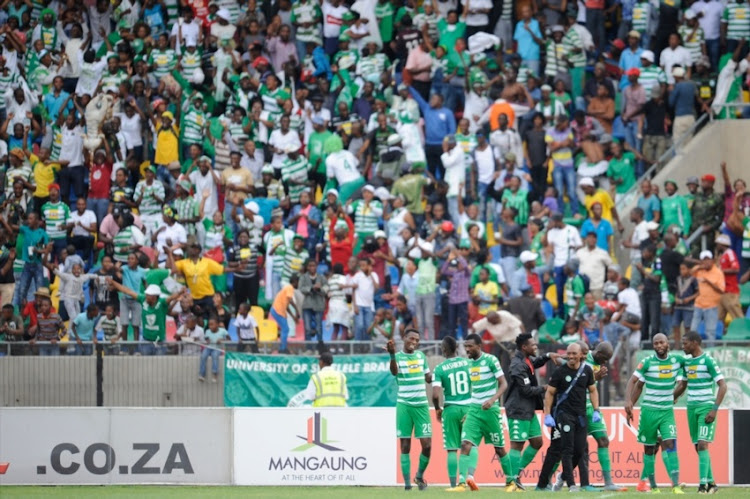 Celtics and their fans celebrating their goal during the Absa Premiership match between Bloemfontein Celtic and Bidvest Wits at Dr Molemela Stadium on October 01, 2017 in Bloemfontein.
Image: Charle Lombard/Gallo Images

Police on Thursday raided an office emblazoned with the branding of football club Bloemfontein Celtic‚ leading to speculation that the Premier Soccer League outfit had been targeted in a SAPS operation.

However‚ this was not the case‚ as police confirmed to SowetanLIVE that it was‚ in fact‚ an adjacent office in the same block‚ on Elizabeth Street‚ which was raided.

Officers confiscated soft drinks and beer to the value of R500 000‚ with the goods believed to be destined for illegal miners in Welkom.

Mangaung police spokesman Captain Chaka Marupe said police received information from crime intelligence that there were suspected stolen items in the building. Although the club occupies a small section of the building – from where it sells match day tickets – the building is adorned with a huge Bloemfontein Celtic banner.

Marupe was adamant that the confiscated items were not found at the Celtic offices.

Attempts to get comment from the club on Thursday night were unsuccessful.

“Police arrived in the building and went to the office apartments and found a large consignment of soft drink packages and also packages of beers in cans. It is believed these packages were destined to be delivered to illegal miners in Welkom‚” Marupe said.

“Police are investigating and no arrests have been made.”