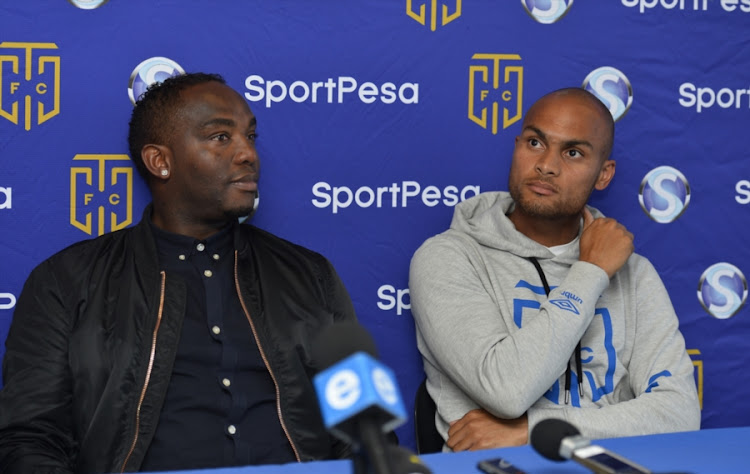 Cape Town City coach Benni McCarthy said he tried to convince captain Robyn Johannes to stay at the club but in the end could not bring himself to persuade any longer as the contract offer from Bidvest Wits was too good for the defender to turn down.

The 31-year-old Johannes has signed a pre-contract with Wits and will move to Johannesburg at the end of the season.

Wits agreed with City not to try and take Johannes earlier in exchange for the Cape Town club allowing Lehlohonolo Majoro‚ who also signed a pre-contract‚ to move immediately in January.

McCarthy and Johannes have been close in a mentorship role‚ then as teammates at Orlando Pirates and now as coach and captain of the Cape Town side.

"Robyn is a player that re-discovered himself this season.

"He was great last season‚ but this year he made up for all the years he missed out because of injury‚" McCarthy said.

"Of course I tried to keep him at City because I have known him since he was 15.

"I played with him‚ and now I get to coach him.

"Our relationship is more than that of coach and player.

"But it's difficult when you are competing with teams who have bigger budgets than you‚ and would throw more money at players.

"It also becomes difficult for a player when you say he has to give up R2 million or R3 million to stay.

"I think I can't try to convince someone‚ especially when you get to the latter stages of your career.

"You have to try and make the best living situation for your family because in two or three years‚ it's over.

"And I don't want players resenting me and saying 'Coach Benni made me decide to stay and now in five years' time‚ I have to go look for a job when I could have secured my future for another extra five years'.

"I don't want to be the guy that kills someone's career like that.

"So‚ I let him decide. It was his choice and it's his life. We obviously couldn't match what Wits were offering. We lost one of our gems and captain‚" added McCarthy.

Johannes missed the club's last two domestic matches as they beat Wits in the first round of the Nedbank Cup but then lost to Kaizer Chiefs at Soccer City.

But he has now completed his suspension and should be available for selection for the visit of struggling champions Wits at Athlone Stadium on Saturday. Kick is at 6pm.

Title hopes remained alive for Kaizer Chiefs as they edged Cape Town City 1-0 at Soccer City on Saturday night and moved into the second place in the ...
Sport
4 years ago

Kaizer Chiefs have a home draw against National First Division side Stellenbosch FC in the Nedbank Cup Last 16, but the pick of the ties in the round ...
Sport
4 years ago

The arbitration in the matter of Cape Town City signing a shirt sponsorship deal with betting company SportPesa might only be heard in the second ...
Sport
4 years ago
Next Article