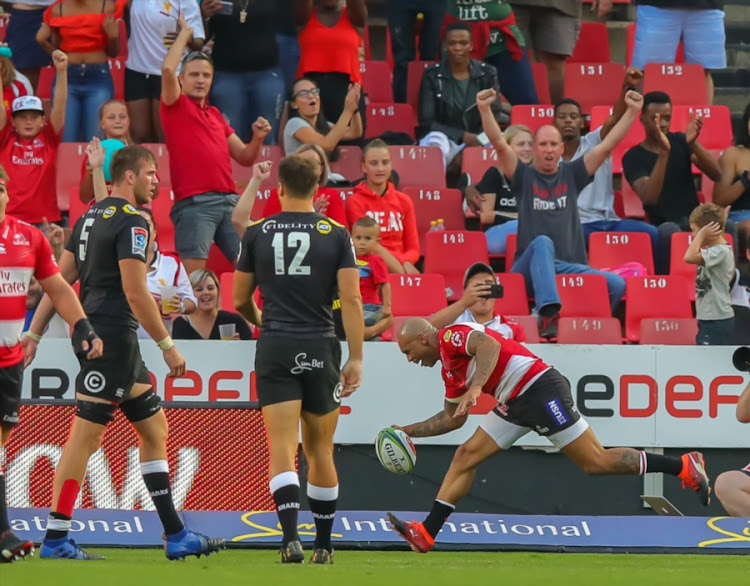 Jubilant supporters as Lionel Mapoe of the Emirates Lions scores a try during the Super Rugby match against the Cell C Sharks at Emirates Airline Park on February 17, 2018 in Johannesburg, South Africa.
Image: Gordon Arons/Gallo Images

More depth‚ more experience‚ more punch were qualities the Sharks were said to bring into this Super Rugby campaign.

Indeed‚ for patches of their clash against the Lions they displayed familiar combativeness and stretched the South African Super Rugby standard bearers.

Crucially‚ however‚ they still lacked the composure to avert a 26-19 defeat at Ellis Park.

It would have required a high level of good fortune for them to have won the match but they had opportunities‚ certainly at the end to at least walk away with a draw.

“(It's) never good to lose in such a way‚ when you've created a lot of opportunities. Tough one‚” sighed their coach Robert du Preez.

He lamented his team's inability to seize the moment‚ blaming poor execution.

“I think we lacked patience at crucial times. I'm not happy with that.”

Some of it might have been explained away by the presence of some early season cobwebs but the coach was having none of it.

“In our previous two (warm up) games we had very few handling errors. In this game it was one after the other.

"This is obviously a Super Rugby game and we were playing against a quality side. You have to look after the ball.”

The one area where the Lions found a weakness and probed away mercilessly was in the scrums.

It is there where newly reconverted tighthead Thomas du Toit became a person of interest for the Lions‚ as they got traction in an area that was to serve them well throughout the game.

Du Preez‚ whose default look is of one that is less than impressed‚ appeared exasperated.

“No consistency. After the first scrum we really battled to get back into it and regain our composure. It is always tough when your pack is going back like that.”

He backed Du Toit though.

“He needs time. There are going to be obstacles along the way. He is only going to get better playing at tighthead.”

Captain Ruan Botha suggested his team may have lacked focus when the packs came to grips.

“I thought our line-outs functioned well but if you don't function well at line-outs and scrums you can't play attacking rugby.

"You can't get on the front foot.”

When Du Preez was asked what he thought of his son‚ Robert's‚ performance he snarled at his interrogator.

“I thought he played well. What do you think?”

He was also impressed with rookie scrumhalf Cameron Wright.

“He got a bit of a knock to the head but I thought he played well.”

The Sharks suffered a body blow before the break when Bok loose forward Daniel du Preez was forced to leave the field.

The injuries he and hooker Akker van der Merwe suffered appear not to be serious according to the coach.

“We don't know yet. He's got a shoulder strain. I don't think it is serious‚” said the coach about Du Preez's injury.

There were a few positives but it was a sobering defeat for the Sharks.

Victory at Ellis Park would have been a statement of intent in the battle for conference superiority.

“We didn't play well but we were in it until the last minute. We could have pulled the game out of the fire‚” said the gloomy coach.