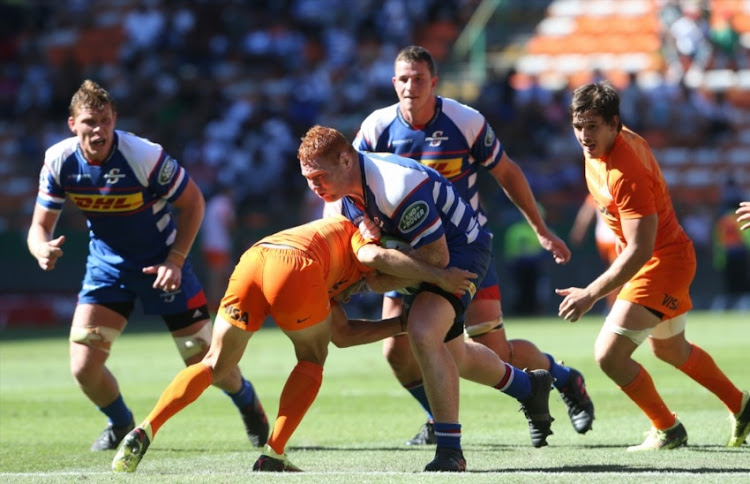 Steven Kitshoff of the Stormers during the Super Rugby match between DHL Stormers and Jaguares at DHL Newlands Stadium on February 17, 2018 in Cape Town.
Image: Carl Fourie/Gallo Images

A massive scrum by a depleted Stormers pack won the home team a game that should never have been that close to start their Super Rugby campaign on a positive note.

The Stormers lost hooker Ramone Samuels to the sin bin for killing the ball in the 65th minute. The Jaguares earned a penalty try from a scrum close to the Stormers line immediately after the Stormers hooker was sin-binned as they tried to match the visitors with seven men.

With seven minutes to go and five points in it, the Jaguares had another scrum five metres out and this time centre Damian de Allende scrummed at flank. An almighty shove earned a penalty for the home team and sealed victory with flyhalf Damian Willemse landing an injury time penalty to secure a 28-20 win

Despite first half tries from centre De Allende and captain Siya Kolisi the Stormers would have been the team least pleased going into the break.

The home team, showing typical early season rustiness, left numerous scoring opportunities spilled on the Newlands turf, a situation that didn’t improve in the second half.

There were too many to list but some of the most frustrating included: flank Cobus Wiese losing the ball over the line as he reached out to score and loosehead Steven Kitshoff dropped a clanger at a lineout five metres from the Jaguares line.

If it wasn’t handling errors plaguing the Stormers it was poor options. Twice they carved holes through the Jaguares defence from deep with moves involving the lively Seabelo Senatla and the ponderous Dewaldt Duvenage, and twice they butchered them when one intelligent option and accurate pass would have led to a try.

With a tour to Australasia starting next week, the Stormers will quickly have to sharpen their game because there was far too much largesse on offer. Better opponents such as the Crusaders and Highlanders, won’t leave the Stormers unpunished for such poor finishing.

The Stormers lineout was messy, losing three on their own throw. Samuels, who was a late replacement for Bongi Mbonambi, struggled to find his jumpers from the outset.

Wiese was lively and hard on defence while No 8 Nizaam Carr carried effectively, providing a strong link with the backs while Willemse and Senatla showed some fine attacking touches.

The Jaguares were typically poorly disciplined and a yellow card for fullback Joaquin Tuculet when he killed the ball with the Stormers on attack. In all the Jaguares conceded 13 penalties to eight.

While Tuculet was off the field Kolisi, who was almost anonymous to that point, collected a pass at pace from a lineout on the Jaguares 22-metre line and bust through three tackles to score the second try of the game.

Debutant wing Raymond Rhule scored a fine solo try early in the second half to open a sizeable lead, but things fell apart after that.