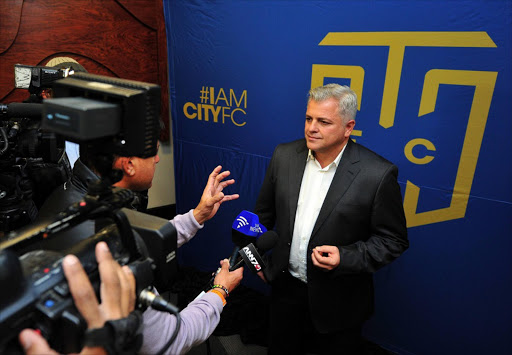 The Premier Soccer League want to throw the book at Cape Town City over the club signing a sports betting company as a shirt sponsor‚ and their continued defiance at instructions to not wear SportPesa’s logo.

The expulsion of the club is therefore a genuine worst-case scenario‚ SowetanLIVE is informed.

There is a possibility‚ too‚ of City being docked three points per game where they have worn SportsPesa’s logo‚ which would almost certainly mean relegation from the PSL.

Cape Town City chairman John Comitis‚ however‚ continues to assert his club “have done nothing wrong”.

At a PSL Board of Governors (BoG) meeting on September 14 it was agreed‚ due to the seriousness of the matter‚ to skip a disciplinary committee hearing and go straight to arbitration‚ which is expected to take place in January.

SowetanLIVE has been informed that the league is leaning towards a standpoint that City’s actions can be considered grounds for an expulsion because:

- The shirt with the SportPesa logo on was never approved by the PSL as per league rules‚ and the club were directly instructed not use it.

- The club has had charges brought against it for every game where they have continued to wear the SportPesa logo. They had accumulated more than 20 charges by mid-October.

- This puts City in defiance of league instructions and article 9.1.16 of the NSL Handbook gives the league the power to “suspend‚ fine‚ terminate the membership of or otherwise sanction or deal with any Member Club” found guilty of such a transgression.

Aggravating the case against City‚ Kaizer Chiefs and Maritzburg United in the past were turned down asking permission from the BoG to have agreements with betting companies‚ and complied.

City chairman John Comitis as a BoG member had much to say about why these clubs could not sign the deals‚ it is alleged.

The arbitrator cannot expel City‚ but can make that recommendation to the BoG‚ who have to make the final decision.

Due to City’s defiance and all these factors‚ there appears an unsympathetic mood towards the club among the BoG‚ TimesLIVE has been told.

Another consequence other than expulsion should the arbitration go against City could be that the club be deducted three points per game where they wore the SportPesa logo‚ and be relegated to the National First Division.

The PSL asserts that a resolution was passed seven years ago that no club would sign a sports betting company as a sponsor without permission until the league had carried out an investigation into the issue.

This investigation was never carried out.

However‚ Comitis disputes that the resolution made any moratorium on signing sponsorships‚ and says it only tasked the league with an investigation.

“I think (the PSL) are on a big witch hunt here and quite frankly we are 100 percent confident that we have done nothing wrong‚” Comitis said on Wednesday.

“Over and above that the league met a senior counsel on the matter without any input from ourselves.

“They handed over the documents and minutes that they had in their possession and the SC came back and categorically stated that there were no grounds in place to preclude us from signing the deal.

“So any charge of us defying comes from a place where they had no right to be implementing such a ruling against us.”

Comitis said the instance where Chiefs were denied a deal with a betting company involved not a sponsorship but a potential “tripartite agreement between Chiefs‚ the league and the company for sports betting rights”.

A verdict has been reached by the Premier Soccer League’s disciplinary committee against Orlando Pirates for the club’s role in the pitch invasion ...
Sport
4 years ago

Platinum Stars striker Bongi Ntuli has been playing with a broken arm in the last two Premier Soccer League outings and will likely compete with the ...
Sport
4 years ago

The soccer official has been released on bail and is expected to appear in court soon‚ the RTMC said.
News
4 years ago
Next Article