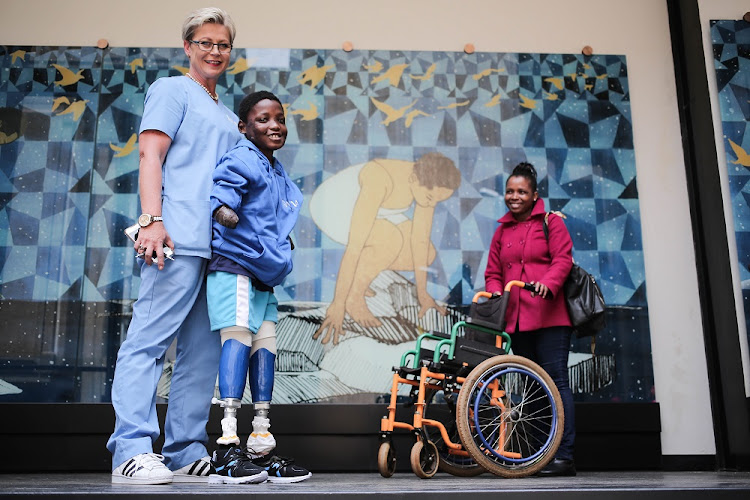 George Masiu From left: Prosthetist Marissa Nel, George Masiu and his mother Angelina pose for a picture after receiving prosthetic legs at the Johannesburg City Council building in Braamfontein, Johannesburg. Rand Mutual (RMA) donated prosthesis to Masiu as part of the City of Johannesburg’s Disability Awareness campaign. Masiu had his limbs amputated after he contracted a rare degenerative disease.
Image: Alaister Russell/The Times

All wheelchair-bound George Masiu‚ 10‚ wanted to do‚ was kick a soccer ball.

On Thursday afternoon‚ his mother‚ Angelinah Masiu‚ of Soweto‚ burst into tears as he took his first two steps‚ realising a dream she thought would never come true.

Holding his wheelchair blanket in the one hand‚ and a soccer ball in the other‚ she watched as Marissa Nel‚ a prosthetist at RMA (Rand Mutual Assurance)‚ helped him stand on his early Christmas gift — brand new prosthetic legs that would have cost her at least R35‚000 per leg in a private hospital.

Passersby started gathering around him‚ watching George shake as he managed to stand up straight. But with his arms also partially amputated‚ he initially struggled to balance himself.

Nel was patient; she held him by his waist and helped him take his first step‚ then the second and the third.

His mother was stunned. She dropped the soccer ball and leaned against a pillar‚ crying uncontrollably.

A woman came up to her‚ rubbed her back and said: “You are supposed to be happy. This is not the day to cry. Your son is walking again.”

But this was just the beginning. 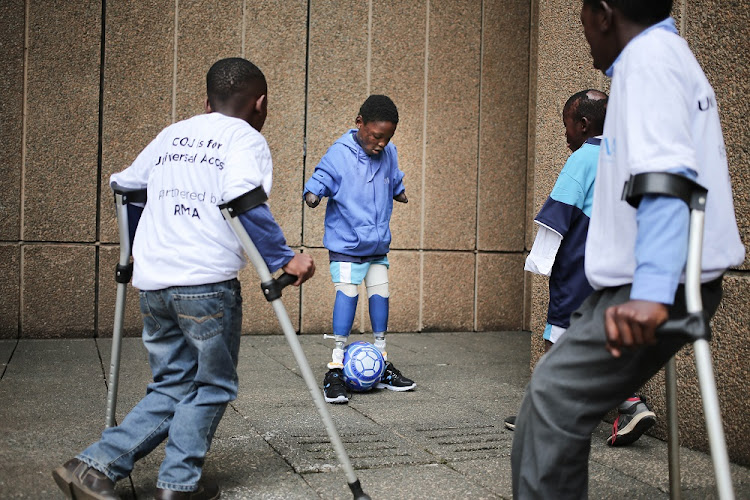 George was not going to take only three steps. Soon he started walking around‚ and 20 minutes later‚ he was playing soccer with his friends from the Adelaide Tambo School in White City Jabuva‚ Soweto.

Even Nel was surprised.

“It is abnormal‚” said Nel. “It takes time for people to walk.”
“Ke thabile haholo [I am very happy]‚” said George‚ excitedly telling TimesLIVE he is a Kaizer Chiefs fan and his favourite player is goalkeeper Itumeleng Khune.

George’s mom said he fell ill in February 2015 with a rare medical condition that eventually led to the partial amputations of his legs and arms.

There were other people who also received prosthesic legs‚ wheelchairs‚ adult nappies and other equipment for disabled people at the event in Braamfontein‚ Johannesburg‚ which was a partnership between RMA and the City of Johannesburg.

But somehow‚ George‚ stole the moment.