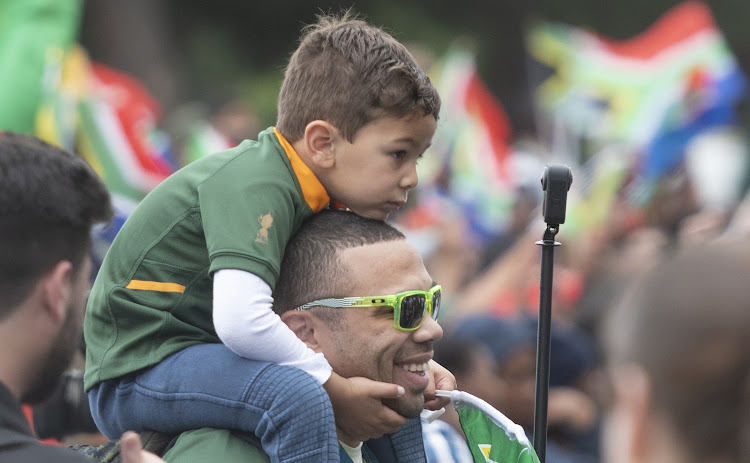 Bryan Habana in the streets of Cape Town showing appreciation for the Springboks during their victory parade on November 11, 2019.
Image: Gallo Images/Brenton Geach

Bryan Habana has urged SA Rugby to appoint outgoing Springbok coach Rassie Erasmus' replacement as soon as possible so that the new mentor can start planning for next season.

Erasmus announced a few weeks ago that he would step down as head coach to focus on his Director of Rugby role at SA Rugby and given that the Springboks play Scotland and Georgia in home Tests in July next year‚ to be followed by the Rugby Championships‚ Habana said preparations must start as soon as possible.

“Whoever the coach is going to be must be appointed as early as possible‚ unlike Allister Coetzee who was appointed a couple of weeks before his first Test‚” said the former Springbok winger.

“I don’t know what is Rassie’s thinking about the new coach but one hopes that whoever gets the job is given the same type of alignment that he got.

"If that happens‚ he (Rassie Erasmus) has shown what happens when there is alignment from the top and all the way down.

"It is not my place to say who the next coach must be but you have South African coaches who are doing very well overseas and there are those that are doing well here at home.”

Super Rugby starts at the end of January and Habana said it would be ideal for the new coach to use the tournament to scout for new players before the World Champions return to action in the middle of the year.

“Players in Super Rugby are going to put their hands up‚" he said.

"And there is going to be a new intake of players who will get opportunities to represent their franchises and who will want to be considered for the Springboks‚" he said.

"The Northern hemisphere season goes on until the beginning of June and trying to keep those players fit for another month is going to be a massive challenge for whoever is going to take over.

“There is so much that is going to happen in the next nine months or so before we see a Scotland team arrive in South Africa.

"Super Rugby is a good opportunity for players to show what they can do.

"Someone like Pieter-Steph du Toit‚ who has been one of the most consistent players in the world recently‚ and Siya Kolisi will want to use the opportunity to go to bigger and better things.

"A lot of them will have an eye on the British and Lions series in 2021 and they are going to have to be consistent so that they are part of that squad.”

Golf legend Gary Player: 'People are scared to invest in SA today because of crime'

SA golf legend Gary Player has decried the high levels of crime that have spiraled out of control in the country.
Sport
2 years ago

All the feels: Rachel and Siya Kolisi invite 15-year-old fan to BrightRock awards

Young people countrywide look up to Springbok captain Siya Kolisi after the team won the Rugby World Cup in Japan on November 2.
Sport
2 years ago
Next Article