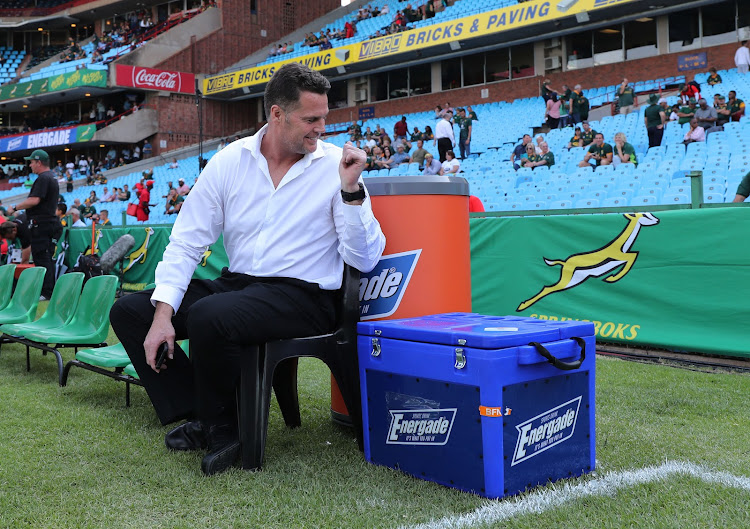 Springbok coach Rassie Erasmus said he would pick a full strength team for the Rugby Championships and admitted he was ‘70-80%’ sure of what his World Cup squad would look like.

With only four Tests to play before the squad departs for Japan for Rugby World Cup 2019‚ Erasmus wants to play his best possible combinations as often as possible.

The time for experimentation is over.

With so little game time before the Boks open their World Cup account against the All Blacks in Yokohama on September 21‚ Erasmus is going to use every minute wisely.

“This year there is only one strategic goal – to try and win the World Cup.

“So we will select the best team in the Championship and then we will decide how we approach the fourth Test against Argentina. If we are on a roll we might want to keep a full strength team and if we’re not‚ we might approach it differently.

“At this stage our opening game against Australia is vital. The All Blacks in Wellington is important in terms of how we set the tone for Yokohama. The last Test against the Pumas might be the decider to win the Championship‚ so I see us picking the best possible side for those Tests.”

Erasmus selected over 50 players in 2018 as he scrambled to build depth and find his best possible combinations with so little time to the World Cup‚ after he replaced Allister Coetzee.

Despite all the experimentation‚ Erasmus has a very clear idea what his final World Cup squad will look like‚ even at this early stage of the year.

“The reality is we only have four Tests before leaving for Japan‚ even though we have a fifth against Japan two weeks before the tournament starts‚ but by then we’re on the plane‚” Erasmus said.

“We will play our best team against Japan because it’s a dress-rehearsal for our opening game.

“It’s going to be hard for a player to play himself into the team at this stage because I’m decided on 70-80% of the team.

“But like a Frans Steyn in 2007 there is a chance for someone to come from nowhere and knock down the door.”