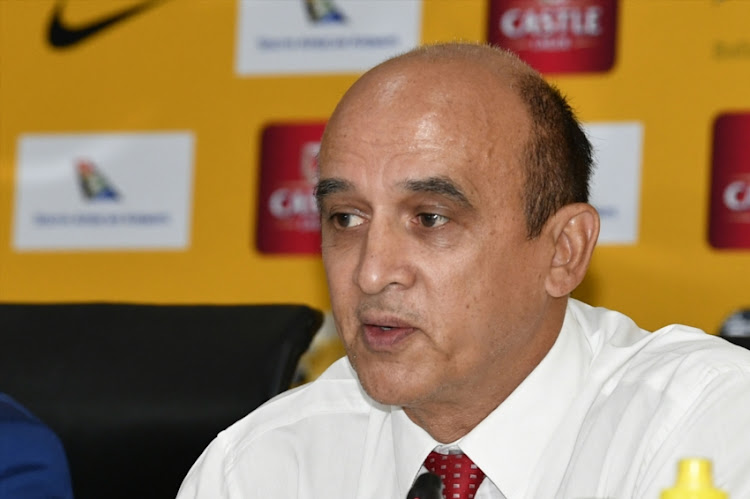 Safa acting CEO Russell Paul said this could be the crucial next step in the Fifa international date system‚ which currently guarantees that clubs have to release players to national teams for major qualifying games and tournaments scheduled on those dates.

Paul was responding to a warning last week made by Mamelodi Sundowns coach Pitso Mosimane to Safa to get their junior national teams in order.

Mosimane was congratulating Safa on hiring Sundowns’ reserve team coach as SA Under-23 coach‚ but questioned the lateness of the appointment‚ three weeks before the start of the 2020 Olympic qualifiers.

He pointed out that the U-23 team of Morocco – where Mosimane was completing a section of his Caf Pro Licence qualification last week – had been in camp for weeks.

“In terms of doing things differently we agree that there’s always room for improvement‚” Paul said.

Mamelodi Sundowns coach Pitso Mosimane has urged the South African Football Association (Safa) to get their house in order and prioritise the junior ...
Sport
3 years ago

“And if you’re going around Africa it’s how those relationships are also structured with leagues. We can’t stop the league from running‚ we can’t pull players out of clubs.

“Sometimes we [with the SA U-20 team] will take a player to the Cosafa U-20‚ and all of a sudden that player is pulled into a pro club straight away.

“In fact it’s also one of the issues we raised with Fifa when we were in Zurich about two weeks ago.

“We said that they need to give consideration to youth tournaments moving forward given the fact that professionalism in those structures – the ages are lowering from time to time now.

“There are no Fifa dates for youth tournaments – to say that we are playing in an U-20 qualifier‚ and there is no obligation for clubs to release their player.

“We said that what they need to consider is the very same approach as they have for men’s and women’s [senior] football‚ that when you get closer to that time [of a major youth tournament]‚ that window needs to kick in so that there are players released.

“Because in theory‚ at the moment‚ there is no obligation for clubs to release youth players other than patriotism.”

On Notoane’s appointment coming so close to the start of the U-23 team’s qualifying campaign for the Caf Africa U-23 Cup of Nations‚ the tournament that serves as Africa’s Olympic qualifier‚ Paul pointed out that Notoane has worked within the junior national teams as an assistant coach for the past few years.

“The guys have been working together for quite a while‚ and coach David has been in the system and the setup‚” Paul said.

The SA Olympic team's first U-23 Afcon qualifier is against Angola‚ away on Friday‚ March 22‚ with the return leg on Tuesday‚ March 26.

The winner will play Zimbabwe‚ eSwatini (Swaziland) or Mozambique for qualification to the eight-nation U-23 Afcon in Egypt in November‚ where top three finishers reach the 2020 Olympics.