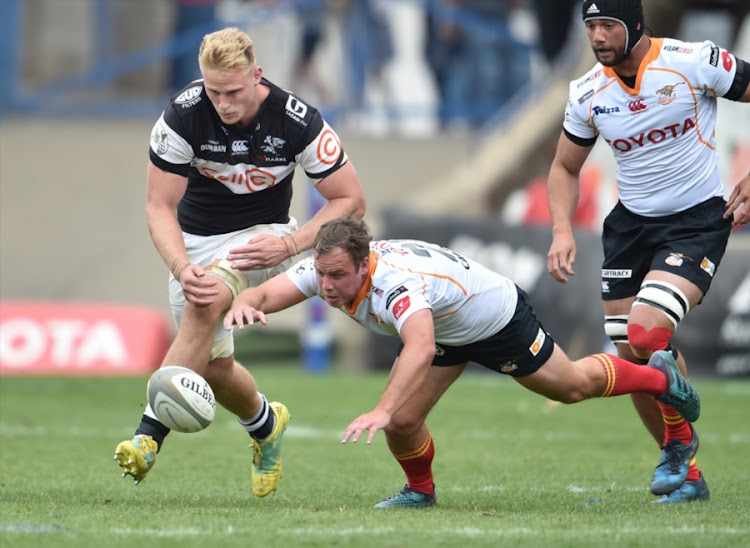 Daniel du Preez of the Sharks and Dian Badenhorst of the Toyota Free State Cheetahs tussle for the bal during the Currie Cup match at Toyota Stadium on September 01, 2018 in Bloemfontein, South Africa.
Image: Johan Pretorius/Gallo Images

The Free State Cheetahs’ Currie Cup race is run at the halfway mark after they slumped to a third straight defeat‚ losing 33-29 to the Sharks at home on Saturday.

The result consigned the Cheetahs to their second home loss and third defeat in three matches in the truncated 2018 campaign‚ which has made it virtually impossible to qualify for the playoffs from here.

With 26 frontline players on PRO 14 duty in Ireland this weekend‚ the Cheetahs’ team was a callow group of Varsity Cup-level players operating alongside some slightly more experienced heads.

One of those was flyhalf Louis Fouche‚ who showed the value of a pivot who has been around the block.

Fouche controlled the little ball the Cheetahs had with some deft tactical kicking while also helping himself to two well-taken tries. Both were scored when he attacked the defence close to the line and managed to muscle his way over.

He is a big unit with a booming boot and will no doubt have a significant role to play during the Pro14 campaign as well.

But his pack was on the back foot for the most part while ill-discipline also hindered the Cheetahs as they conceded 10 penalties to the Sharks' two.

The Sharks turned down every kick at goal‚ preferring to back their rolling maul from a strong field position‚ and it paid off.

Hooker and captain Chiliboy Ralepelle scored twice from mauls that rumbled unstoppably to the Cheetahs’ line while flank Wian Vosloo also crashed over from the back of a maul.

Despite the three tries from those mauls‚ the Cheetahs repelled another four attempts‚ which ensured the score remained competitive and the match stayed in the balance until the final 10 minutes.

Fouche’s two tries and another fine effort from wing Lloyd Greeff‚ which had its genesis in a Fouche kick into space‚ kept the Cheetahs in the contest until the 68th minute.

Sharks No.8 Daniel du Preez scored thanks to a fine no-look pass from scrumhalf Cameron Wright‚ to take the lead to 11 points with as many minutes left of the clock. It was just too much of a deficit to overcome in the time remaining and with the lack of possession the Cheetahs had.

A late penalty try when the Sharks collapsed a rolling maul was an ironic twist to the tale‚ but it was too little‚ too late for the Cheetahs to save the day‚ and probably their season.

Springbok coach Rassie Erasmus has made a bold and popular call by bringing in French-Based utility back Cheslin Kolbe for the Rugby Championship ...
Sport
3 years ago
Next Article