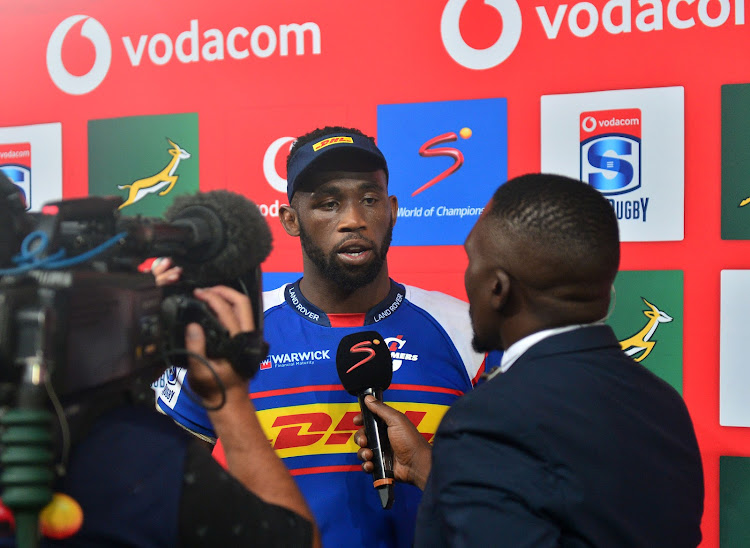 The DHL Stormers captain Siya Kolisi will play his 100th Super Rugby match when he runs out to lead his side in a crunch encounter at PPC Newlands Stadium in Cape Town on Saturday May 5 2018.
Image: Samuel Shivambu/BackpagePix

Stormers coach Robbie Fleck has reshuffled his side for Saturday’s must-win clash against the Bulls at Newlands as captain Siya Kolisi plays his 100th Super Rugby match.

JJ Engelbrecht moves to centre with EW Viljoen dropping out‚ SP Marais comes in at fullback and Raymond Rhule returns on the wing.

Tighthead prop Frans Malherbe and flyhalf Jean-Luc du Plessis are both included on the bench and will make their first appearances this season when they come on to the field.

“Siya has been part of the Stormers family for a long time and I am immensely proud to see what he has achieved on and off the field.

Playing against the Bulls is always a big occasion and Kolisi couldn’t have scripted a bigger rival to celebrate his achievement against.

“It is as big as it gets locally‚” Kolisi said. “Eben [Etzebeth] also pointed that out to me so I’m really excited and honoured obviously.

“I know players always say it’s about the team‚ but really it is because this is such an important game and one we have to win. If you aren’t excited for this game‚ you shouldn’t be playing rugby.

“A win is first and foremost in what I want out of the match. I will only celebrate when we have the win.

“I won’t lie and say I’m not happy about reaching 100 caps and I’m thankful to so many people who have helped me get here.

"Those guys took me in and made me welcome. They created a great environment and I still want to win Super Rugby as a thank you to those other guys too.”

In terms of the team selection‚ Fleck believes that moving Engelbrecht to centre is the right call after the player produced a strong 20 minutes in the midfield against the Rebels last weekend.

“JJ did really well last week and had an impact late in the game ‚” Fleck said. “He has shown good form every time he’s had opportunity.

“EW Viljoen has played every game and needed a rest and he was also sick at the start of the week‚ which enabled us to give JJ a spin at centre this week.

“SP Marais was on the bench last weekend but we feel his introduction is the right call for this weekend and Raymond was rested last weekend because he had played every game up until then.

“Jean-Luc (Du Plessis) and Frans (Malherbe) have had two games for Western Province in the SuperSport Challenge and we feel that is enough to reintroduce them to this level from the bench.

“They both give us a lot of experience in the reserves as well and with Damian Willemse leaving for the Junior World Championships soon‚ Jean-Luc needs game time to get up to speed.”

Lions coach Swys de Bruin hopes an urgent examination of his team’s intensity and ball protection will help them record a first ever Super Rugby win ...
Sport
4 years ago

The Wanderers Rugby Club has made allegations of racism against the Roodepoort Rugby Club‚ claiming players from the latter physically attacked their ...
News
4 years ago

The Golden Lions Rugby Union has condemned a racially motivated incident during which Wanderers Rugby Club players were verbally and physically ...
Sport
4 years ago
Next Article