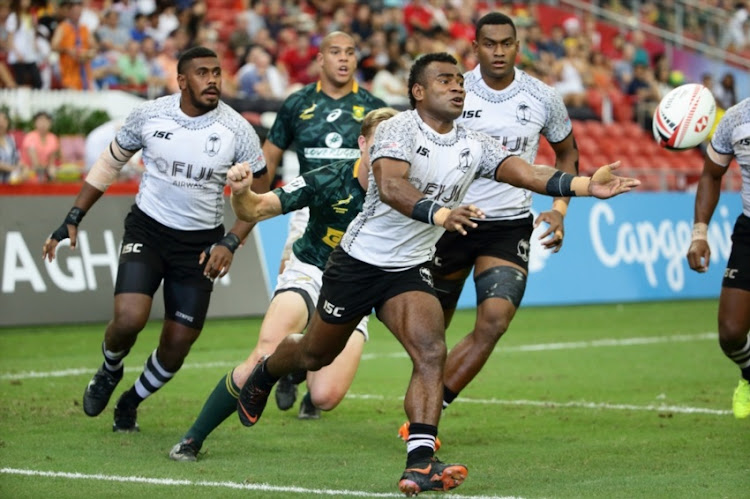 Cape Town - For the first time since December 2016, the Blitzboks slipped off the top of the overall World Series standings after finishing fourth at the Singapore leg of the 2017/18 season on Sunday.

Fiji, who beat South Africa in the semifinals, went on to win the tournament and in so doing moved to the top of the series standings with two legs to play.

The islanders now have 145 points after winning their fourth tournament of the campaign. The Blitzboks collected 15 log points to move to 141 with two rounds remaining.

The Blitzboks have spent 17 straight tournament as World Series leaders since winning in Dubai at the beginning of the 2016/17 season.

But despite remarkable consistency, which saw them reach their eighth semifinal in eight tournaments this season in Singapore, Fiji have been more ruthless winners.

The Blitzboks have only won a single tournament during the current campaign, in round one in Dubai.

Fiji’s 12-10 semifinal win over the Blitzboks in Singapore was also their fifth win in seven games against SA this season.

The change at the top of the standings is deserved for Fiji, but it also shifts all the pressure on to them going into the season’s final two tournaments in London and Paris.

Fiji, who started the tournament three points behind the Blitzboks and beat Australia 28-22 in the final.

To make matters worse for Neil Powell’s team, veteran Kyle Brown injured knee ligaments and will require surgery to repair the damage. He will not be available to play in the final two tournaments of the series, as well as the Rugby Sevens World Cup in July in San Francisco.

On the opening day of the tournament , the Blitzboks lost the services of Rosko Specman, while Selvyn Davids missed the encounter against England because of injury.

The Blitzboks opened the day with a 24-12 win over Kenya in the Cup quarter-finals, with Siviwe Soyizwapi scoring three tries.

However, against Fiji they failed to hang on to a 10-0 lead, with a sole conversion again the difference between the two sides, which was the same margin of defeat against England.

Powell said that although the outcome was not what they wanted, he was pleased with a number of aspects.

“We asked the players for three things – to bring energy, look after the system and put in the effort, and they did that,” said Powell.

“We are very harsh when we evaluate ourselves and I am happy that they delivered on those things we wanted. We made some unmistakable mistakes though and we are still striving for that perfect game. The season is not over yet and I am looking forward to those two remaining tournaments.”

The coach was also pleased by the performances of the younger players: “We have some senior players available back home, but after the performance of these younger players, there will be a good competition for places. The guys gave everything and it is sad that they did not get anything out of the tournament.”