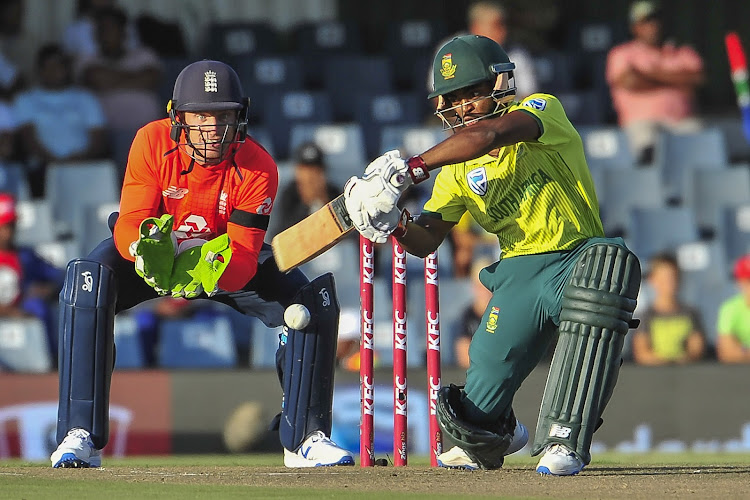 Temba Bavuma top scored with a brisk 43 to guide SA to what turned out to be a competitive first innings score as the Proteas took a 1-0 lead in the three-match series against England.
Image: Deryck Foster/BackpagePix

The Proteas sealed a breathless one run win over England to draw first blood in the first KFC T20 International of the three match series at Buffalo Park in East London on Wednesday night.

Quinton de Kock's men posted a competitive 177/8 in their 20 overs, despite an up and down innings, with England then looking well set to chase it down, only for a superb final over from Lungi Ngidi who defended seven runs to deny them.

Tom Curran (2) was caught on the boundary off the second ball of the last over of England's reply, Moeen Ali (5) was bowled off the penultimate delivery and Adil Rashid (1) was run out trying to get home for the second run that would have sent the match to a super over.

England's innings started much like the Proteas, as openers Jason Roy and Jos Buttler started well, while Jonny Bairstow continued the good work after the first wicket.

Returning Protea legend Dale Steyn got the initial breakthrough, as Buttler (15) toe ended a catch to David Miller in the third over.

However the fourth over bowled by Jon-Jon Smuts, his only of the match, was brutally disposed of by Roy, who hammered him for two fours and two sixes with 22 coming off of it.

Steyn, Ngidi and Andile Phehlukwayo then came in for a bit of tap, before Phehlukwayo bounced back well in his second over to get rid of Bairstow (23), trapped LBW with England 91/2 in the ninth over.

Captain Eoin Morgan then joined Roy and they confidently took the visitors past 100.

Just when it was looking like England were going to cruise home, Roy popped a simple catch to short fine leg off the bowling of Beuran Hendricks to fall for 70 off 38 balls (7x4, 3x6).

New man Joe Denly (3) then gave Rassie van der Dussen an easy catch off the bowling of Phehlukwayo in the next over to bring SA back into the game.

Ben Stokes (6) then holed out to David Miller off Ngidi in the 18th over, leaving England with 23 to get off the final 12 balls.

Morgan took the attack to Hendricks in the penultimate over, hammering him for two fours and a six to bring it down to seven off eight balls, but was then caught for 52 off 34 balls (7x4, 1x6) to add an extra twist to the tale.

At the start of play England won the toss and elected to field, which seemed to backfire at first as SA captain De Kock and Temba Bavuma got the home side off to a flying start.

It was relaxed from one end but carnage from the other as Ali opened the bowling, with his first three overs going for just 17.

But at the other end first Curran and then Mark Wood were torn into, with de Kock leading the charge, as their two overs went for 35.

Curran, bowling the second over, saw two boundaries fly over mid-on and then mid-off, while De Kock then added a six over mid-off as 15 came from it.

Wood's fourth over started badly as a full toss no-ball over waist high was under edged for four, with the free hit then smashed back down the ground for six as 11 came off the first ball and another nine followed with 20 in total coming off it.

De Kock's fun however ended in the fifth over as he was looking to hammer Ali for six he skied the ball to long on where Denly took a good catch to dismiss the captain for 31 off 15 balls (3x4, 1x6).

Van der Dussen then joined Bavuma and they continued the good work, taking the Proteas to 68/1 at the end of the powerplay.

Van der Dussen did live a bit of a charmed life, surviving a bad review for LBW from England off the bowling of Chris Jordan and then overturned being given out LBW for 29 off Rashid.

Van der Dussen brought up the Proteas hundred with a boundary off Rashid in the 10th over and at the half way point the hosts were well placed on 105/1.

However the second half of the innings then did not go to plan as the fall of both set batsmen slowed the scoring.

Van der Dussen (31) was caught trying to pull Stokes to the boundary, with Bairstow making a good catch running in off the boundary in the 11th over and in the next Bavuma was dropped by Denly and then caught by Ali, both off mistimed sweeps against Rashid, to fall for 43 off 27 balls (5x4).

With the score 113/3 at that stage the Proteas could have still pushed on to a big total, but some good England bowling, particularly at the death when just 17 came off the final three overs, stopped them from reaching 200.

Miller (16), Smuts (20) and Phehlukwayo (18) all got starts without managing to kick on in the closing overs.

A fantastic final over from Jordan saw just three runs off it and three wickets fall as he bowled Dwaine Pretorius (1) and Hendricks for a first ball duck off the first two balls, while Phehlukwayo was run out off the final delivery, with the total proving to not be enough in the end.

Experienced South African Dale Steyn has his eye on the Twenty20 Cricket World Cup in Australia this year as he takes on added responsibility as ...
Sport
2 years ago