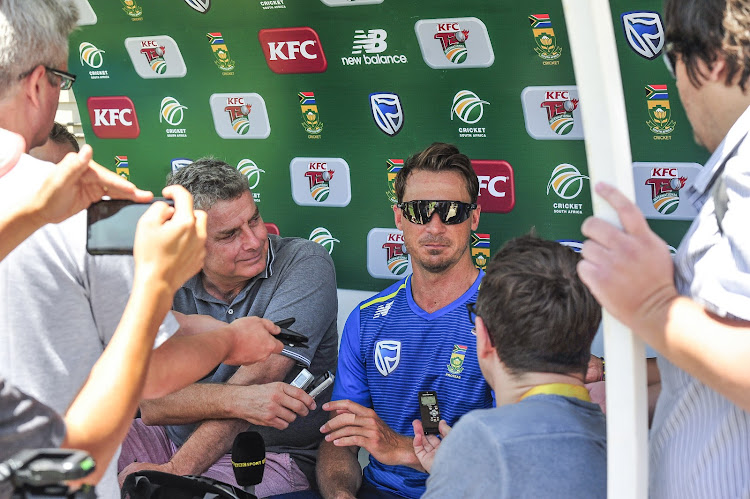 Experienced South African Dale Steyn has his eye on the Twenty20 Cricket World Cup in Australia this year as he takes on added responsibility as mentor to his team’s young fast bowlers.

Steyn is regarded as one of the greatest quick bowlers to play the game, but has been laid low by injury for long periods in the last three years.

The 36-year-old is set to play his first Twenty20 International since March 2019 when South Africa host England in the first match of a three-game series at Buffalo Park in East London on Wednesday.

Steyn, who ended his test career in August having taken 439 wickets in 93 matches, says his only goal for now is to play in the T20 World Cup in October.

"With test cricket, the workload was too much as I want to extend my career for as long as I can," Steyn told reporters on Tuesday.

"In test cricket you can bowl 20 overs in a day, that is five T20s, so it was a smart decision.

"I love playing cricket, right now I wake up every morning and I can’t see myself doing anything else.

"As long as the desire is still there to play at the highest level, to get batters out and out-smart them … once I have decided I don’t want that I will walk away."

Steyn admits he has had to adapt his game after chronic shoulder problems reduced his once blistering pace, but has enjoyed challenging himself to find new ways to get batsmen out.

"I want to keep experimenting and trying to change my game," he said.

"If I’m only going to play one more match I want to take a wicket with every ball, not try and defend a boundary."

Steyn spent most of his career in the same team as current South Africa coach Mark Boucher and acting director of cricket Graeme Smith, and know that he is one of the few senior statesmen left in a young squad, has added responsibility on the pitch.

"This is a young group of players and my role is to orchestrate the bowling attack a little bit," Steyn said.

"I want to stand at mid-off and say to the bowler, ‘what are you thinking?’ and hopefully they can learn and get better.

"You want to win every game, obviously, but right now it is more about learning. If we win the World Cup, nobody is going to care if we lost to England in February."

CSA and the South African Cricketers' Association (Saca) are well on their way to mending fences after CSA’s members' council agreed to rescind their ...
Sport
2 years ago

Dale Steyn may have put a firm pause on his red-ball career, but he still remains a potent shortest format assassin with his inclusion in South ...
Sport
2 years ago