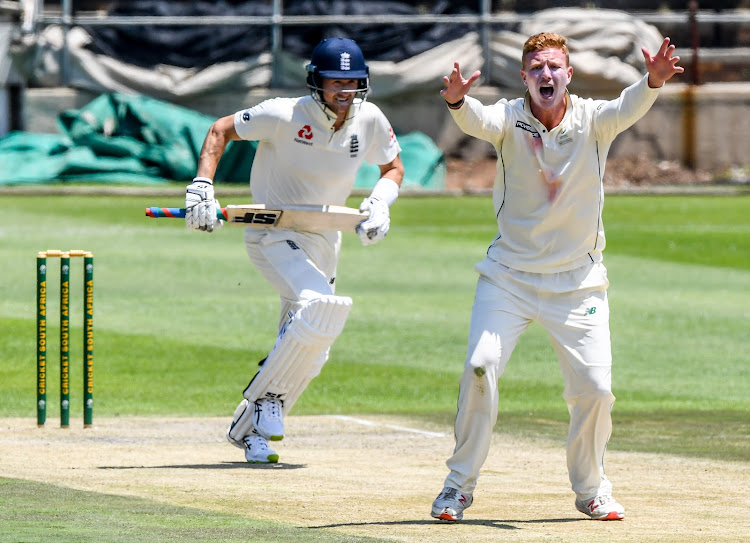 Stephan Tait of SA Invitational appeals in front of Dominic Sibley of England during day 1 of the 2-Day Tour match between SA Invitational XI and England at Willowmoore Park in Benoni on December 17, 2019.
Image: Sydney Seshibedi/Gallo Images/Getty Images

The race to partner Rory Burns at the top of England's flaky batting order is well underway and Dominic Sibley laid out a warm-up marker with a disciplined, if slow innings on the first day of England's two-day game against the Cricket South Africa (CSA) eleven in Benoni.

The critical part was that they all got in, made their runs and retired not out as England racked up 309/4 at stumps.

While Willowmoore Park is generally not as spicy and challenging as compared to South Africa's Test grounds, it was a much needed work-out nonetheless.

Sibley said he enjoyed his time in the middle having worked on a few things after a difficult tour of New Zealand.

“It's a case of working on a few things and spending some time at the crease. You need to get those sort of things embedded into the game and I hope they'll come good in the Boxing Day test if I play,” Sibley said.

Sibley, who didn't impress in New Zealand with scores of 22, 12 and four in his three knocks in the two Tests against New Zealand, also did well in the warm-up game against the New Zealand eleven. He only scored 14 in the New Zealand A game before struggling in the Test series.

There's a sense that he needs to get over the good starts in warm-up games and convert them into something substantial in the Test series if he gets the chance.

England are in need of a solid opening pair even though Burns has established himself at the top of the order.

Sibley understands the need to getting runs to cement his place next to Burns for the Boxing Day Test.

“I've only had three innings, so it's not a sample. In the first innings, I felt really good and at home. I think in the second test, I put myself under pressure to get a big score, so I'll play my game and stick to my strengths,” Sibley said.

“I have to start getting some scores and stuff but we'll see how it goes. I hope Boxing Day will be my day and hopefully I'll play.”

The messy current state of South African cricket isn't of much concern to England coach Chris Silverwood.
Sport
2 years ago

The selectorial net has been cast far and wide as the Proteas have six uncapped players in their Test squad for the first two Tests against England.
Sport
2 years ago

Cricket South Africa's acting director of cricket Graeme Smith says his goal is to get the organisation's structures in fine fettle and leave the ...
Sport
2 years ago
Next Article