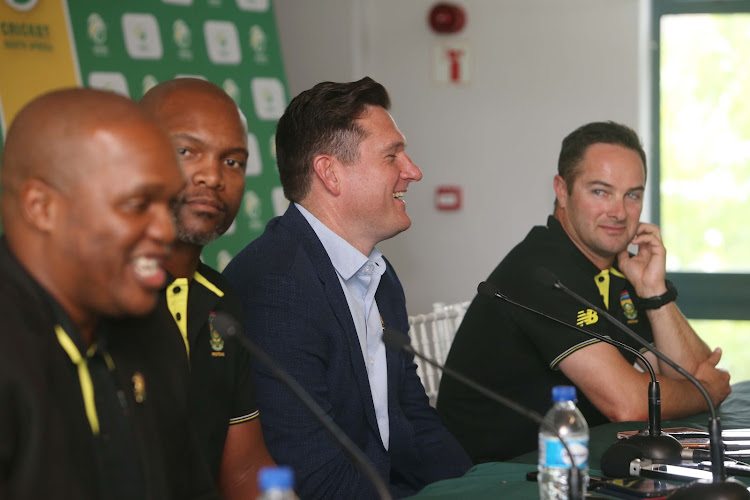 Cricket South Africa's acting director of cricket Graeme Smith says his goal is to get the organisation's structures in fine fettle and leave the politics to those who know better.

Smith announced the appointments of former long-time team-mate and Titans head coach Mark Boucher as the Proteas team director on Saturday while Enoch Nkwe‚ who was the interim team director‚ will be his assistant.

The two appointments and that of the administrative‚ logistical and media staff are permanent while convenor of selectors Linda Zondi is a temporary one.

Smith was appointed last week and he said he doesn't have a relationship with Cricket South Africa's board as those conversations are handled by acting chief executive officer Jacques Faul.

“My goal is purely to get the Proteas and the structures performing well.

"We know cricket is a big part of bringing in budget and with a high performing Proteas team‚ that goes a long way in terms of building confidence.

"My focus is on that while Jacques is dealing with the other matters‚” Smith said.

“There is no relationship (with the board) at this stage because my point of call has been Jacques.

"We've got in and we're trying to sort the game and take it forward.

"What has happened of late has been very disappointing for everybody.

"We need to turn around the image and a lot of things still need to shift.”

The interim period (until April) that Smith will be operating in has been seen to be of concern.

The 38-year-old Smith was quick to allay fears that there won't be any long-term work done because of his short-term appointment.

However‚ he said he would have to look at the other structures and see where things need to be fixed.

Smith also said the need to hire the likes of Zondi‚ who's term had ended after the disastrous Cricket World Cup campaign a few months ago‚ was informed by budgetary and continuity matters.

“Hopefully‚ within that period‚ we can settle things down at Cricket South Africa (CSA) and work on that going forward.

"At this stage‚ I'm fully focussed on the next three months and there's quite a lot of stuff that needs to be done‚” Smith said.

“My job description is quite extensive‚ in the short term sorting out the Proteas‚ but will also look at the other structures that are beneath me.

"I need to do some work in terms of reviewing the structures and seeing what's in place‚ what's working‚ what isn't and see where the frustration is.

"Hopefully Jacques can find me some budget to do a few things and hopefully make an impact.

“It's a budget thing.

"We've come in from a short term perspective and Jacques is also playing catch-up on a few things.

"It's getting to the financial year end. From a continuity perspective‚ I felt Linda could add value and he'll put best practice into place going forward.”

The Test and South Africa A squad will be announced on Monday as captain Faf du Plessis‚ Boucher‚ Nkwe and Zondi will form part of the Test squad.

Ashwell Prince will coach the SA A side that'll face England in a three-day First-Class game in Benoni from December 20-22.

Linda Zondi is set to return as the Proteas convenor of selectors, albeit on a temporary basis.
Sport
2 years ago
Next Article