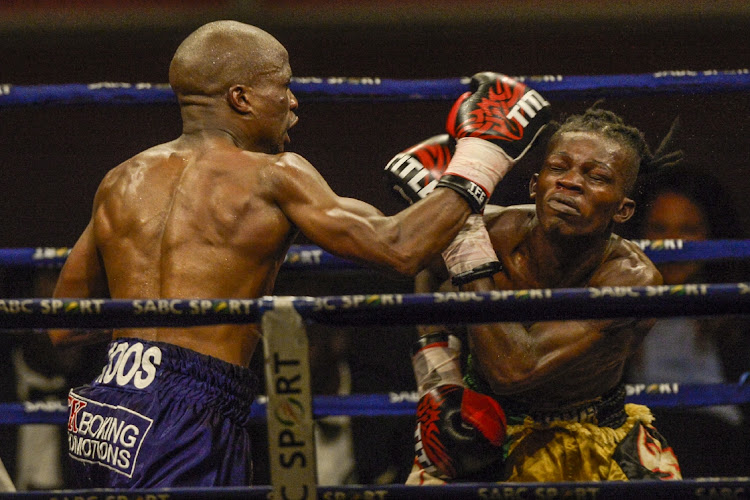 Koos Sibiya is inspired by Bongani “Wonder Boy” Mahlangu’s achievement in winning the SA title at the age of 42.

Mahlangu dethroned Ayabonga “Jay Jay” Sonjica via a seventh-round stoppage, ending his reign as the national junior-featherweight champion a  few weeks ago in East London.

Sibiya’s trainer Bernie Pailman was in the corner with Mahlangu’s brother, Sandile Mahlangu, when the boxer scribbled his name in the history books by becoming the national champ at 42.

Known as “The Great Last Warrior”, 41-year-old Sibiya from Siyabuswa in Mpumalanga is based in Gauteng and is trained by Pailman in Westbury, Johannesburg.

The evergreen fighter is on the verge of challenging for the national junior-lightweight title that is held by Lunga Stemela.

Sibiya just needs to defeat Lucky Monyebane on Thursday night at The Galleria in Sandton and he will be good to challenge the Capetonian champion who ascended the throne in March after beating Sibusiso Zingange.

The top five contenders for the title are Khanyile Bulana, Zingange, Phila Mpontshane (former champion), Monyebane and Sibiya. Bulana has not fought since being stopped by Michael Magnesi for the IBO title in Italy.

Zingange, who won the belt from Mpontshane, must still go under the knife to sort out his shoulder while Mpontshane is understood to be moving up the weight.

This scenario works in favour for both Monyebane and Sibiya. Their contest will form part of The Walt Disney Company Africa's tournament.

Monyebane, who is trained in Pretoria by former SA, WBU and IBO champ Sebastiaan Rothmann, is rated No 4.

Rated fifth, Sibiya has previously held the WBF Africa and ABU titles. He has been around since 2000 with 23 wins from 45 fights.

Live action on ESPN on Thursday night will begin at 6.30.

Some boxing nicknames can be used to mock

The sport of boxing is somewhat unique in that nearly all fighters have some sort of nickname, and several go through multiple nicknames in the ...
Sport
3 weeks ago

Snamiso Ntuli will be carrying the hopes of an estimated 300,000 people from eMnambithi in Ladysmith when he challenges for the South African ...
Sport
3 weeks ago

Boxing promoter Sfiso Shongwe says it has been challenging for The Walt Disney Africa Company, whose boxing tournaments are televised live by ESPN ...
Sport
3 weeks ago

Boxing guru Hezekiel “Ziggy” Mtshali says only death will part him from the fistic sport. Mtshali also reminisced about the good old days he shared ...
Sport
3 weeks ago

Gideon Buthelezi says the suggestion by his promoter Ayanda Matiti for a camp in East London came at an opportune time when he needed tranquillity to ...
Sport
3 weeks ago
Next Article