BSA thumbs down for Khorombi-Helebe mismatch 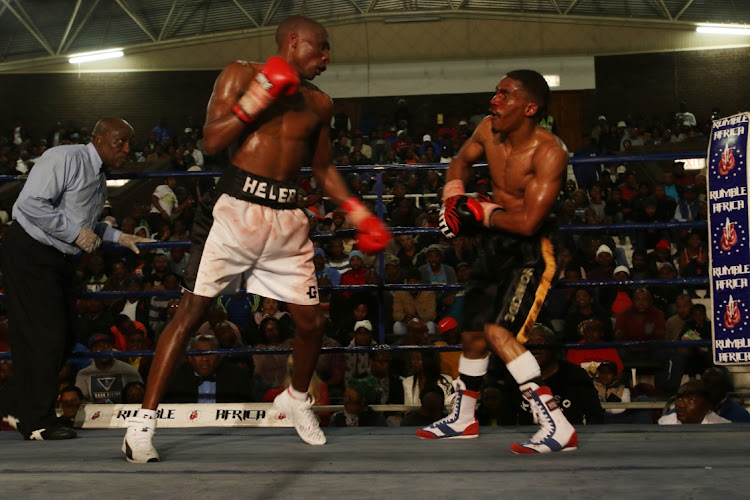 Boxing SA’s sanctioning committee has turned down a proposed mismatch between two-fight novice Pfariseni Khorombi and veteran Toto Helebe which was set to take place at Wild Coast Sun in the Eastern Cape on May 21.

That’s because Khorombi was seen as a sacrificial lamb for ring warrior Helebe in what would have been a six-rounder as part of Lastborn Boxing Promotions’ tournament organised by promoter Xolani Mampunye.

The fight may have been put together by his matchmaker but the final say rests with Mampunye, who had the nerve to submit the proposal to the sanctioning committee for its approval.

The committee – chaired by BSA board member Sakhiwo Sodo – has turned down the mismatch and made it clear to the office of the COO that it will never sanction such a contest.

Khorombi, on the other hand, has yet to taste victory after two losses and has not donned gloves for a professional boxing contest since 2016.

It is known that promoters worldwide favour certain boxers. They have the final say with regard to opponents to face their boxers.

In recent times trainers and managers have been  telling matchmakers which opponents they want for their fights. Some get away with mismatches in which a newcomer with a great career in the amateur ranks becomes cannon fodder for an experienced journeyman.

It becomes serious cause for a concern when a matchmaker puts together a contest like the one between Helebe and Khorombi and the promoter gives it his blessing. This reflects total disregard for the health and safety of the fighters. It also betrays a lack of fundamental understanding of the sport of boxing.

Boxers are the alpha and omega of the sport and their safety and health is therefore paramount. Matching Khorombi with Helebe is tantamount to dicing with death and that is not what boxing is about.

Lightning never strikes the same place twice. This is a common phrase you’ve probably heard before, and it is often used to reassure someone that ...
Sport
3 weeks ago

Representatives of the recently launched WBC SA, Larry Weinstein and Alan Norman, are patiently waiting for the head office of the WBC in Mexico to ...
Sport
3 weeks ago

It will be an honour for Mawande Mbusi to lose to him in their six-rounder, Joshua “TKO” Studdard, the assertive boxer from Sophiatown, boasted ...
Sport
3 weeks ago

Before Bopape dethroned Nkululeko Mhlongo via an 11th round knockout on Friday evening, Alexandra had not had a national champion for over 30 years.
Sport
3 weeks ago
Next Article