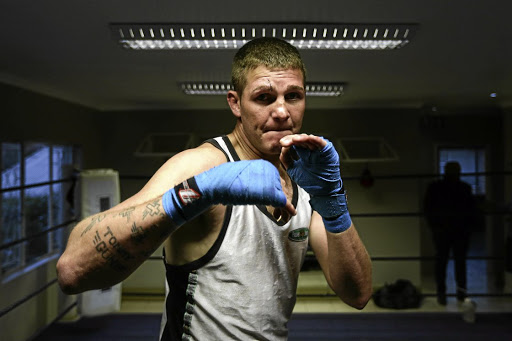 September 18 has been confirmed by boxing promoter Janie Hebler as the date for the return to the ring of the country’s super talented former two-weight IBO champion Thomas “Tommy Gun” Oosthuizen.

Hebler – who promotes under 5th Elements – said Ootshuizen, whose wayward life landed him in jail where he spent 10 months after being found guilty for assault with an intent to do grievous bodily harm, will face Youssouf Kasongo Mwanza from Congo in the cruiserweight division over eight rounds. She said her tournament would take place in Parkview, Pretoria.

“You know, I would have loved to give you more information on this tournament but I prefer to wait until Boxing SA comes back to me and say, yes, the tournament is going ahead because the sanctioning committee has done its work before I can make comments,” said the promoter whose last tournament was in 2019 at Time Square, Menlyn in Pretoria. "But I am excited.”

The tournament is dubbed Against All Odds and that is exactly what 33 year old Oosthuizen is doing. His obituary as a fighter was written long time ago due to his bad behaviour outside the ring. His loss to Aleksei Egorov for the IBF International light heavyweight title in what was his last fight in 2019 in Russia was described by his detractors as proof that he had reached a cul-de-sac.

That was because Egorov would have been excited to hold the candle for Oosthuizen during sparring. That Russian was involved in only his eighth fight and truthfully he had no business to be in the ring with this country’s former IBO super middleweight and light heavyweight holder.

That defeat was Ootshuizen’s third against 28 wins with 16 knockouts. Now a reformed ex-convict, Oosthuzien is under the guidance of trainer Harry Ramogoadi, whose VIP Boxing Academy produced its first champion three weeks ago when Sharadene Fortuin won the SA bantamweight female belt from Mellissa Miller. Oosthuizen, whose hand speed is like the tappets of an engine, is unbeatable on a good night. The only local boxer to beat him was Thabiso Mchunu – another super talented left hander – who avenged his controversial points to Oosthuzien – with an emphatic defeat in their second fight.

Ramogoadi would not say much when pressed for  comment.

“Look, Tommy has given me what I asked for in training but the  most important scenario here is that he has given himself a commitment that makes him feel, walk, talk and act like a world champion again,” he said. ‘This may sounds weird, I know, but do yourself a favour present yourself in the hall where Tommy will be making a come-back on September 18 and talk to me after the fight. I am proud of him for everything that he has overcome as a human being.”

Abdul-Aziz Kunert’s dream of becoming a South African boxing champion has literally come into fruition except for one final hurdle and that is for ...
Sport
3 months ago

Trainer Bruno Pereira has urged Boxing SA to reinstate Sabelo Ngebinyana as the SA junior-bantamweight champion because the title is still vacant.
Sport
3 months ago

It has been a year since Boxing SA director of operations Cindy Nkomo took over as CEO but in an acting capacity after Tsholofelo Lejaka resigned ...
Sport
3 months ago
Next Article