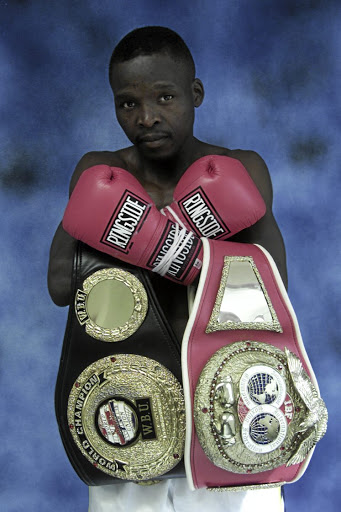 But Ledwaba had to first deal with Arnel Barotillo in an IBF elimination bout on August 28 1998.

"Winning the IBF belt was the pinnacle of my career," said the 48-year-old retired boxer who won three world titles in three weight divisions.

After losing the IBF belt in his sixth defence to Manny Pacquiao in Las Vegas in 2001, Ledwaba won the WBU belt in the featherweight class after defeating Vuyani Bungu in 2002.

Top trainer Anton Gilmore has given Mike Tyson and Evander Holyfield a thumbs up for their highly publicise exhibition boxing bouts.
Sport
2 years ago

"To be the IBF champion proved that I was up there among the best because you know that we did not command such respect as WBU champions because it was not rated among the top-four most respected boxing bodies," said the man who co-promotes boxing with Joyce Kungwane under the banner of TLB Boxing Promotions.

The other sanctioning boxing bodies he is referring to are the WBA, WBC and WBO.

Sadly, Ledwaba's trainer David Kgotsane did not live to enjoy the fruits of his hard work.

He died from lung ailments three weeks before Ledwaba's first defence against Edison Valencia Diaz in the US. Ledwaba dedicated his stoppage win to his fallen mentor.

"His passing on affected me badly. It seemed he felt he was going to die because he gave us training guides and said to me whatever happens to him I must continue with my title defence," said Ledwaba, who roped in respected trainer Mzimasi Mnguni in his corner to assist Tshidiso Manamathela, who was Kgotsane's assistant.

"I have gone back to training fighters," said Ledwaba.

Some 350 ex-fighters reconnected in Pretoria at the weekend‚ trading old war stories like they used to exchange leather in decades gone by.
Sport
2 years ago

Lehlohonolo Ledwaba and Dingaan Thobela, and BSA CEO Tsholofelo Lejaka, are supportive of the idea by former world champion Chris Eubank to start a ...
Sport
2 years ago

East London star Zolani Tete lost his WBO bantamweight crown in Birmingham‚ England‚ on Saturday night‚ getting stopped in the third round by ...
Sport
2 years ago
Next Article