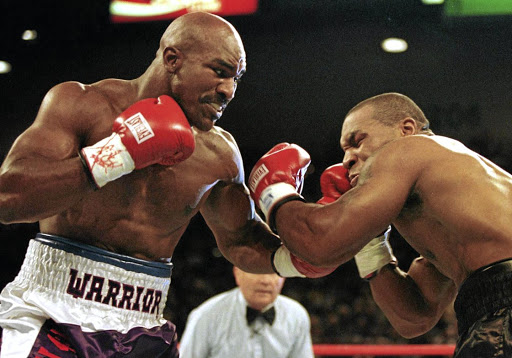 Top trainer Anton Gilmore has given Mike Tyson and Evander Holyfield a thumbs up for their highly publicise exhibition boxing bouts.

But the "Irish Terror", as Gilmore was known in his heyday, said the health status of the two heavyweight legends must be the determining factor.

"My biggest concern is with neck muscles. If neck muscles are not strong enough to resist the blows then it's a problem because that is when brains get wobbled. Punch-drunk syndrome also kicks in 10 years after retirement," said 50-year-old Gilmore, who retired in 2008 at 38.

He has fought 10 exhibition bouts, some of which were against Cassius Baloyi and Lehlohonolo Ledwaba.

Maemu wants his mojo back

Tyson infamously bit a chunk off Holyfield's ear in one of their fights.

It is reported that Tyson will be in action in Australia where he stands to make $1m (R18.4m). He has already started training.

Holyfield announced this week that he was also gearing up for exhibition bouts.

Gilmore said he thinks Tyson and Holyfield miss the ring. "Holyfield is broke; he needs this," said Gilmore about the man who is said to have earned over $250m (R4b.6bln) in prize money alone while still a boxer. His current net worth is estimated at $500,000.

Holyfield stoked the fire by suggesting he and Tyson meet for the third time. Tyson, whose current net worth is estimated at $1m, scoffed at the idea of fighting former All Blacks rugby star Sonny Bill Williams, who is undefeated after seven fights, with a victory over Francois Botha.

Tyson's handlers were quoted as saying he would not fight Williams because such a matchup would be an insult to boxing and that if he does get back into the ring it will be with a real boxer.