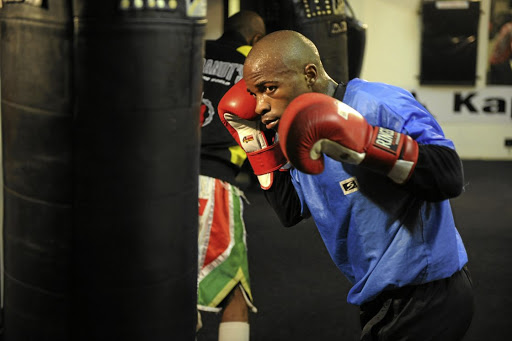 Patience bears fruit. That is how successful boxing trainer Colin "Nomakanjani" Nathan summed up the future of his charge Moruti "Baby Face" Mthalane.

Nathan, who will lead Mthalane into the fourth defence of his IBF flyweight belt against equally competent foe Akira Yaegashi in Japan on December 23, revealed yesterday that "Moruti will get the biggest purse money ever in his illustrious career".

Nathan refused to divulge the exact figures but said it will be a seven-figure purse. "He will also be able to bank seven figures after paying all the people that must be paid," said Nathan.

"He has waited a very long time to command such huge purses," said the successful trainer who works closely with high-profile boxing gurus around the globe.

It is rather shocking to hear that Mthalane will earn his biggest purse only now, when he has previously fought against many respected boxers, including Nonito Donaire.

Mthalane, then trained by Nick Durandt, made four defences of the same IBF belt he vacated due to a paltry purse he was set to earn for his fifth defence.

Mthalane was then matched for the vacant IBO belt and Thulani Magudulela announced that he would pay Mthalane R1m for his fight against Jether Oliva in 2014. Mthalane's life then went from bad to worse when he spent two years without action despite being the IBO champion.

He joined Nathan and fought under TK Promotions, which helped him revive his moribund career.

Nathan, through his connections, got him to fight for the vacant IBF belt, which Mthalane won in Kuala Lumpur. He has defended twice, in Macao and Japan, and his successes outside the country duly earned him the sportsman of the year award at the SA Sports Awards ceremony in Durban last month.

Mthalane, Nathan and assistants Vusi Mtolo and Bernie Pailman leave on Sunday for Japan where Mthalane will defend against Yaegashi on December 23.

"We are looking for a successful defence in Japan," said Nathan.