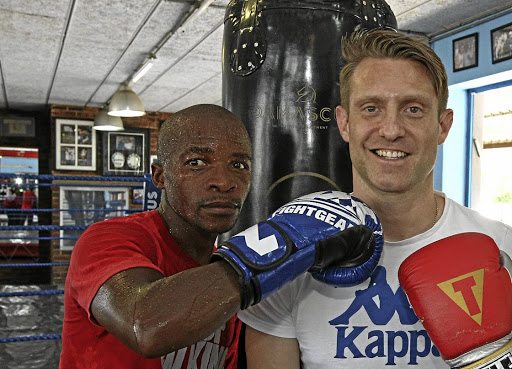 Boxing SA Trainer of the Year Award-winner Colin "Nomakanjani" Nathan says it is hogwash that Moruti "Baby Face" Mthalane will have to first get recognition by other boxing sanctioning bodies before he can be involved in a unification bout.

Mthalane holds the IBF flyweight belt. The WBC, WBA and WBO are yet to recognise him with a top rating which then suggests hiccups when he should face WBC holder Charlie Edwards, WBA titlist Artem Dalakian or WBO champion Kosei Tanaka.

But Nathan clarified this yesterday. "A fighter can unify his world title provided he is a legitimate world champion. Moruti can qualify for a unification because he is the IBF champion," Nathan said.

"We were already offered a unification for July by Matchroom Sport [led by founder English entrepreneur Barry Hearn and his son Eddie] which does a lot of work with MTK [Global - a boxer management company] for Moruti to fight Charlie Edwards.

"But I turned down the date because it is too soon. Moruti has just fought; he needs time to recover."

Mthalane has not lost in 10 years.
Sport
3 years ago

Mthalane went 12 hard rounds with Masayuki Kuroda in what was the 36-year-old champion's second defence in Japan two weekends ago.

"It would have meant going straight back into another camp, so I felt it is not good for Moruti," said Nathan, who trains the KwaZulu-Natal boxer whose career is managed by MTK Global, which signed him up a few days before he met Kuroda.

Nathan, who heads MTK Africa, is confident the unification bout will happen.

"I am leaving for Macau next week to represent MTK Africa in the IBF convention, so I will be meeting the shakers and movers in boxing," said Nathan, who paid tribute to the public which nominated him for the award he won last week.

"I also want to thank my fighters for choosing me to train them. I am still over the moon regarding my awards. I have kept my trophies in my dining room so that I see them all the time and that will remind me of what I have done in SA boxing."

Nathan won that award last year. Mthalane, from Lindelani in Durban, was last weekend honoured with a Special Achievement Award. The former SA and IBO title holder is on a 10-year winning streak. His last loss was in 2008 in Las Vegas.

Moruti Mthalane was taken the distance for the first time as IBF flyweight champion‚ but he transformed the face of mandatory challenger Masayuki ...
Sport
3 years ago
Next Article