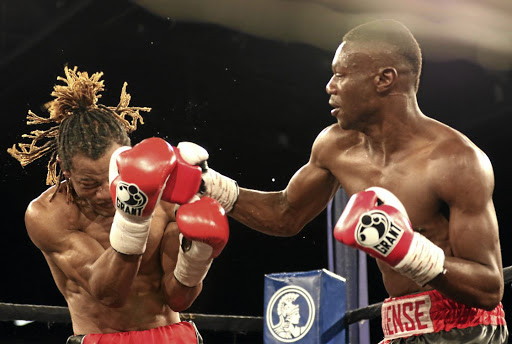 If boxing champions are like volcanos that erupt ever so often, then surely Jabulani Makhense is that champion.

Having won the Gauteng welterweight title in only his sixth professional fight when he demolished Gift Bholo last year, Makhense followed up with a majestic points win against Xolani Mcotheli for the WBA Pan African title in February.

Makhense took his craft a step further when he outfoxed the awkward Michael Mokoena in June.

Kevin "Two Guns" Lerena predicted a knockout win on Saturday and the boxer with a perfectly chiselled body delivered.He knocked Sefer Seferi in the ...
Sport
2 years ago

The lanky boxer from Limpopo, who is trained in Pretoria by Sebastiaan Rothmann, produced a stupendous performance last weekend against the dangerous Marios Matamba, the 25-year-old Congolese who is trained in SA by Sean Smith.

Matamba tried very hard to earn his 10th knockout but he found Makhense too clever and slick to pin down, on his way to a unanimous points decision.

Interestingly, the 26-year-old Makhense looks up to home boys Cassius Baloyi and Phillip Ndou, whose illustrious careers were guided in Johannesburg by the prolific late trainer Nick Durandt.

Makhense's promoter Rodney Berman has not stopped talking about what he sees in his charge.

"The boy is an unbelievable talent and we will do all we can to help him reach his goals. In fact, both Makhense and Matamba will feature in our next tournament in November," said Berman.

History will be made at Emperors Palace on September 21 when boxers meet in a winner-takes-all fight for the WBA Pan African and IBF Continental ...
Sport
2 years ago
Next Article