Mokoena aims for the top 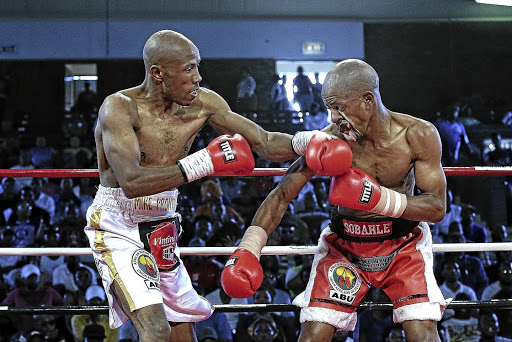 Michael "Pronto" Mokoena's powerful left finds a mark on Phumelela Sobahle's jaw in an encounter in which he stopped him in East London.
Image: Nick Lourens

Michael "Pronto" Mokoena is a living full proof that perseverance is the mother of success.

Just to steal a few lines from American civil rights leader, Martin Luther King: "If you can't fly then run, if you can't run then walk, if you can't walk then crawl, but whatever you do, you have to keep moving."

Mokoena is the African Boxing Union's SADC lightweight boxing champion, and this came about because he kept on trying even when odds seemed stacked against him.

The 28-year-old failed twice to win titles even after having given his best. The judges were not convinced of the shift he put in against Jabulani Makhense, who won their WBA Pan African junior welterweight title fight.

Mokoena then challenged the SA lightweight champion Thompson Mokwana. But the three-fight rule that a boxer must have fought three fights in a weight division to be eligible for a title fight - threw him out.

The fight went ahead as a non-title 10-rounder. Mokoena stopped the champion in the sixth round in March.

That bout will linger in the fans' minds for a long time. The two boxers knocked each other down. The referee Simon Mokadi did not panic. He counted for both, and they both got up and continued with the fight until Mokoena pummelled Mokwana into submission.

In that situation a boxer who fails to beat the count when the referee reaches the count of 10, loses the fight.

That win has since opened doors for the Gauteng boxer who will become the first local pugilist in history to fight in India in the lightweight competition to take place in October.

According to Mokoena's trainer, Anton Gilmore, his fighter will be out of the country for close to a month.

Mokoena's purse money will be about R15,000 every time he is involved in a six rounder, said Gilmore.

Mokoena, who is based in the south of Johannesburg, said he did not want to rush Sobahle, but will instead put him under pressure. "It was an interesting one and I am happy because I come from a loss. I needed to redeem myself. I knew that I had the advantage of experience over him and I had to make sure that I win."

Gilmore said: "I was cautious about who we fought because I did not know our opponent and I also did not get any footage of him. Michael got rocked in the second round but came back strongly in round three where Sobahle complained that Michael hurt his shoulder. I told Mike to finish that man. He was actually looking for a way out."