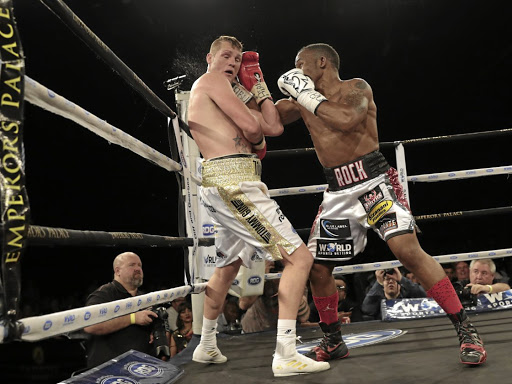 Thabiso "The Rock" Mchunu spewed bile yesterday when asked for a reaction to the controversial majority points loss of his ABU cruiserweight title to Thomas "Tommy Gun" Oosthuizen at Emperors Palace on Saturday.

The 30-year-old Johannesburg-based boxer from Pietermaritzburg is naturally a man of few words. But what happened last weekend brought out his hidden side.

"This is rubbish," he fumed. "I spoke to my father [a former cruiserweight boxer Alex Mchunu who trained Thabiso before the boxer relocated to Johannesburg to join Sean Smith] about this thing.

"He told me of what he said they went through in the amateur ranks. He said they would beat up their opponents but still lose their fights. He said this is exactly what has happened to me. My father encouraged me not to take this bad decision to heart because it will destroy me mentally.

He continued: "As much as my father has spoken, still I am saddened that I, as the champion, took the fight to Thomas but still the judges gave him the fight."

"Thabiso was stripped after losing in his WBC International title fight in the US (against Constantin Bejenaru) in November," said Ngatane.

Mchunu said he is aware of rumours of a rematch in December. "I will gladly accept it on condition that none of those judges get appointed. I can tell you that those judges went in there with their minds already made up."

Thabo Spampool and Francis Manning scored the fight 115-113 while Pumeza Zinakile declared it a draw at 114-114.