Joshua versus Povetkin knocks football off British back pages 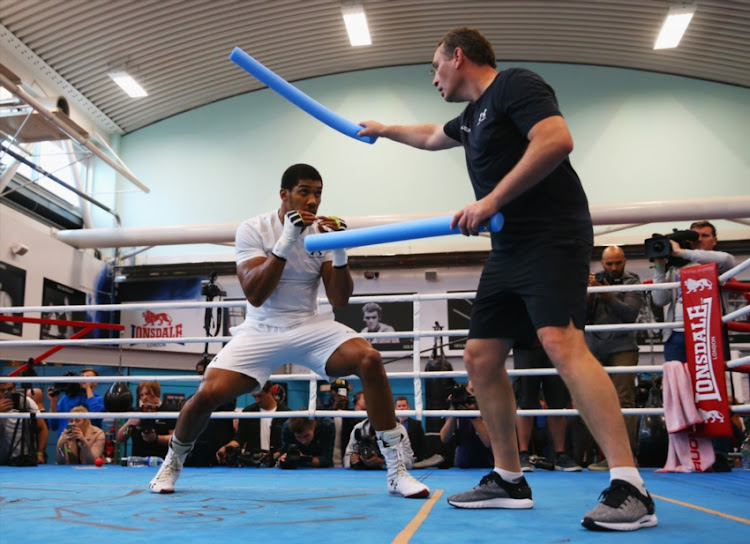 Chelsea and Liverpool are unbeaten after five rounds of this year’s Premier League and Liverpool pipped Paris Saint-Germain in a five-goal‚ 90-minute highlights package of a Champions League game on Tuesday.

But Wednesday’s sport sections in some of the most football focused newspapers in the world saved a big chunk of space for an even bigger bloke.

He’ll be in action at Wembley on Saturday‚ but there won’t be a football in sight. There also won’t be any diving to try and con the referee. Quite the contrary‚ unless the fix is in.

“Anthony Joshua slackens timekeeping after 200 rounds of boxing‚” was Wednesday’s headline in the Guardian.

“How Joshua creates his knockout power‚” quoth the Times.

But you aren’t going to keep football out of the picture for long in this country‚ as the Daily Telegraph reminded us: “Anthony Joshua studies Cristiano Ronaldo training regime to try and extend his career.”

The tabloids trained their long lenses and short sentences on what Joshua eats — “five eggs in the morning‚ among other food … two chicken breasts at lunch and two fillet steaks at dinner” along with a “morning and bedtime snack” — the fact that he has “shared snaps of first and current trainers”‚ and a warning that he will concentrate on “winning rather than being entertaining”.

You had to pick fairly carefully through all that to discover Joshua would not be trying to live up to Alex Ferguson’s view on Dennis Wise: “He could start a row in an empty house.”

For one thing‚ the house will be anything but empty‚ what with a crowd of 80 000 expected.

Thank you‚ Michael Buffer. Who will‚ of course‚ be in attendance. The presence of outrageously tanned‚ silver-haired‚ jut-jawed ring announcer who might have happened freshly off the set of a soap opera is the seal of authenticity for any fight that hopes to pass itself off as a big deal.

For still another thing‚ there’ll be someone else in the ring. And we don’t mean the ref. Alexander Povetkin‚ who is 10 centimetres shorter than Joshua‚ loses out by 17 centimetres in terms of reach‚ and has knocked out 26% fewer of his opponents‚ will also turn up.

Amid all the hype over Joshua‚ a Watford lad‚ in the British papers it’s easy to forget that Saturday’s shindig is a contest‚ not a coronation.

And that Povetkin won’t come to the ring as fodder for Joshua’s booming punches but as the IBO champion and a boxer who has lost only one of his 35 bouts.

According to the promoter‚ Eddie Hearn‚ the Russian represents plenty more than that: “Povetkin has got not just his team but the country and‚ dare I say‚ [Vladimir Putin’s] government behind him. They are all involved.

This is like a mission from them to beat Britain and for a Russian to become the world heavyweight champion.

“He and his team know how important this is for them and for Povetkin nationally. This is not just about him personally winning a title; this is a major‚ major thing if he could stick one on a Brit.

“You know that level of government is involved in Povetkin so there will be plenty of instruction‚ well wishes and calls of intent from them saying: ‘Come on‚ this is important for our country.’”

All that said — way too much by Hearn — Povetkin is not expected to win. Instead‚ he is placeholder for a far more eagerly anticipated‚ as yet uncertain showdown between Joshua and Deontay Wilder.

Wilder‚ and American‚ holds the World Boxing Council title and negotiations for a fight with another Brit‚ Tyson Fury‚ which is tentatively set for November or December‚ will start next week.

So a lot needs to happen before the posters for “Joshua versus Fury” go up around London. But what a prospect that would be; the “Battle of Britain”‚ and all that. And this time at least 90 000 bums will be on Wembley’s seats.

We’ll all be ready to rumble‚ won’t we‚ Mr Buffer.