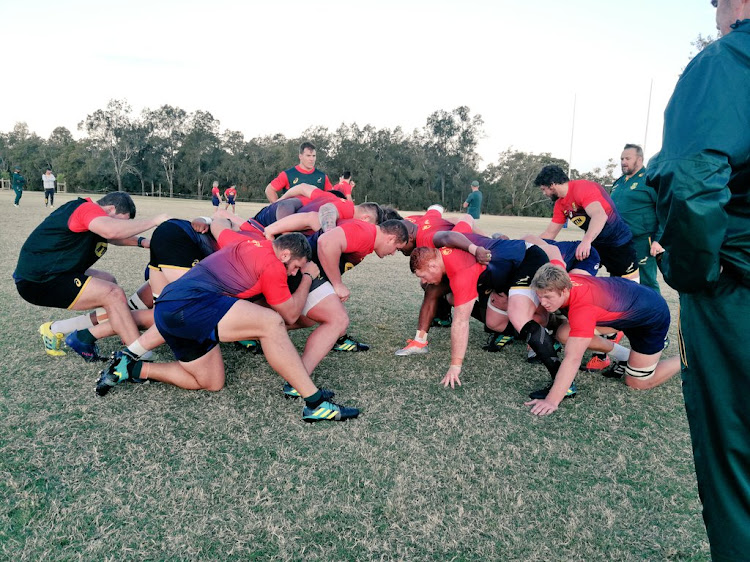 A file photo of the Springboks in a scrum session.
Image: SA Rugby/Twitter

Despite surging Covid-19 cases that resulted in the country moving to a stricter adjusted level 4 lockdown, scheduled professional and amateur sporting activities will continue as planned.

But fans will not be allowed in and outside stadiums.

On Sunday, President Cyril Ramaphosa moved the country from level 3 to level 4 for the next two weeks as the nation grapples with the more deadly Delta variant that is now dominant in South Africa.

The president’s address left the sports-mad nation confused as to whether sporting activities were banned or not.

However under the new Covid-19 regulations, as per section 17(3) of the government gazette on Monday, sporting activities, including both professional and non-professional matches, are allowed to continue, subject to strict adherence.

The government gazette will be met with welcome relief by SA Rugby as it means that much awaited British & Irish Lions tour next month will go ahead as planned despite the level 4 lockdown restrictions.

This also means that the Springboks’ crucial two-Test series against Georgia at Ellis Park that starts on Friday July 3 and ends on July 9 will continue as planned.

The Springboks will use the Tests against Georgia as warm-up to their showdown against the visiting Lions next month.

The three-match series against the Lions starts on July 24.

South Africa is in the grip of a third wave of Covid-19 infections, led by the Delta variant that was first discovered in India.

There is also the Carling Currie Cup that is ongoing and they too will continue with their matches as scheduled.

The British & Irish Lions arrived in South Africa on Sunday and the tourists were immediately alerted that their hosts the Springboks were forced to cancel training early on the day and self-isolate following three positive Covid-19 cases.

The Lions will kick-start their scheduled eight-game tour with a clash against the Johannesburg-based Lions.

The three Test matches against the Springboks will be played on consecutive Saturdays from July 24 and SA Rugby executives have been assured that the country moving to adjusted level 4 lockdown will not affect their plans.

The Premier Soccer League (PSL), which is currently organising the promotion-relegation playoff matches, and the South African Football Association’s (Safa) ongoing ABC Motsepe League national playoffs in Nelspruit will carry on with their plans as scheduled.

There is also the Cosafa Cup currently taking place in Nelson Mandela Bay.

Sporting organisations across the country are expected to lay out their plans on how to carry on with their operations under strict Covid-19 adherence.