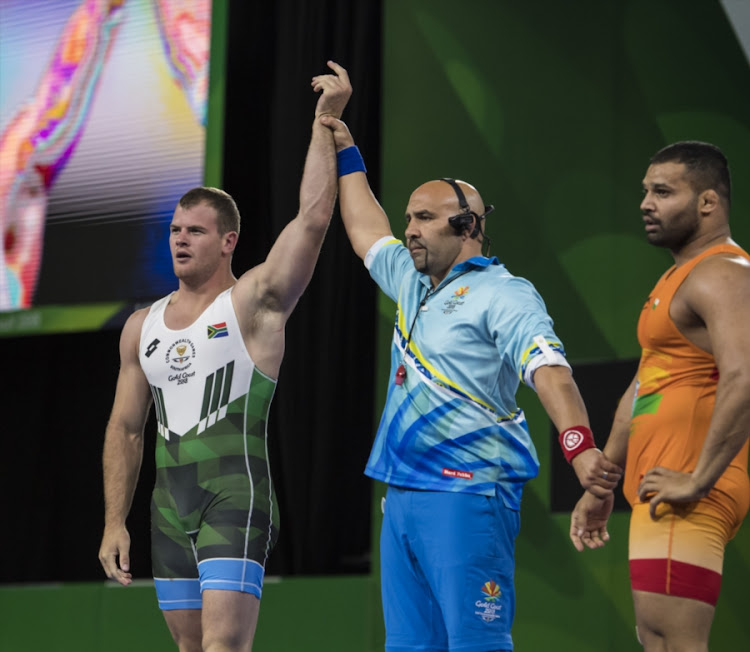 He won all four of his fights by technical superiority — his sport’s version of a knockout — including the final against India’s Mausam Khatri‚ his conqueror at the Commonwealth wrestling championships late last year.

“He was tough‚” Erasmus said later. “I think he had a knee injury. That’s not my problem.”

In the semifinals he dispensed of Canada’s Jordan Steen‚ leaving him with an injury that required him to get his head bandaged. “I just wrestled with my head straight‚” Erasmus explained.

At the Cardiff Games in 1958‚ SA wrestlers won six of the nine titles on offer.

But the sport in SA has been in a slump since then‚ picking up only the occasional minor gong in this millennium.

Hanru Botha won the 74kg silver for SA on Thursday.

Erasmus‚ who was taught to wrestle by his father Rassie from the age of three‚ wasn’t overly fazed by the significance of his victory‚ saying he hadn’t even expected to win.

“No‚ I didn’t expect gold. I took it match by match and then succeeded‚” he said.

Erasmus‚ a car parts salesman‚ has no competitors in his weight category at the national championships because‚ according to one of his teammates‚ he’s too good — his opponents either go up to the next division or they drop down in weight.

So for practice he wrestles his stablemate‚ Michael Gaitskill‚ who competes in the 86kg competition here on Saturday.

He also wrestles his brothers‚ one of whom competed at a junior Commonwealth Games.

Erasmus said he had no special plans to celebrate other than by returning home‚ but was insistent that he be quoted thanking his parents‚ siblings and fianceé Shané Symens.

“Please make sure my fianceé is there otherwise I’m in trouble. Please‚” he said.

It rained early medals for South Africa at the Commonwealth Games on Thursday‚ with wrestling‚ mountain biking and lawn bowls contributing four gongs.
Sport
3 years ago

Organisers have urged athletes in Australia for the Commonwealth Games to respect the terms of their entry visas after Cameroon reported that a third ...
Sport
3 years ago

Sunette Viljoen won the fourth Commonwealth Games medal of her career on Wednesday‚ merely weeks after a debilitating back injury that had prevented ...
Sport
3 years ago
Next Article