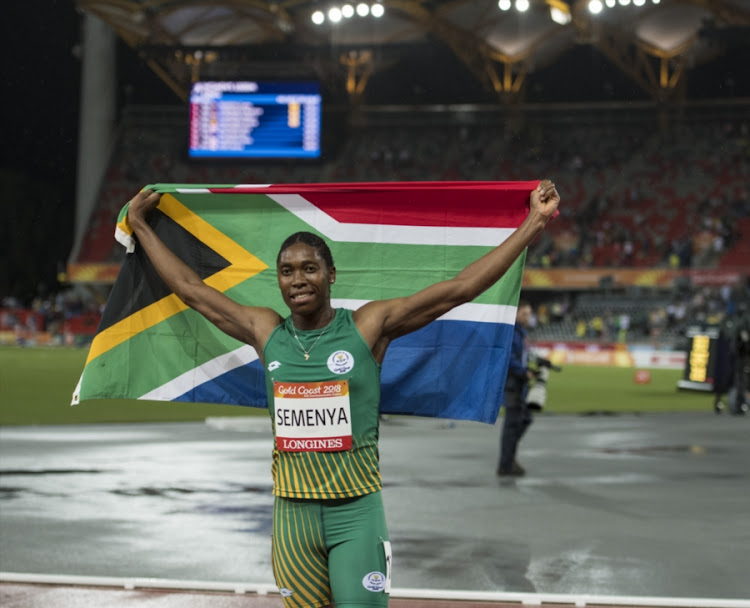 Team SA bagged three medals in Gold Coast on the day‚ and the visually impaired bowlers secured an effective fourth by winning a spot in Wednesday’s final with the last delivery of their semifinal against Wales.

Arguably the most dramatic performance came in the last race of the gala where Chad Le Clos unleashed a display of immense power to set up the 17th gong of his career‚ a bronze in the 4x100m medley relay.

Brad Tandy‚ part of the foursome‚ also added a silver in the 50m freestyle earlier in the evening.

SA ended the day in fifth place on the medals table with nine gold‚ six silver and six bronze‚ one spot ahead of Canada.

“Actually I knew in the last lap the record is gone‚ I just have to maintain the pace‚” said Semenya‚ adding she would break four minutes before the end of season.

“I know I’m able to go under four minutes now so I don’t have to worry a lot about that now in training. I just have to fix some errors‚ I just need a bit of speed there now.”

Semenya ran with her usual confidence‚ sitting in fifth place behind leader Beatrice Chepkoech of Kenya before making her move with 250m to go.

When she attacked‚ nobody could respond‚ although the two medallists behind her both set personal bests‚ Chepkoech 4:03.09 and Melissa Courtney of Wales 4:03.44.

Semenya competes in the 800m heats on Thursday with the final set for Friday.

Le Clos dived into the 4x100m medley relay for the third butterfly leg with his team in fourth spot.

He torpedoed the Gold Coast pool in 50.10sec — nearly a second faster than the next quickest and‚ more crucially‚ nearly three seconds quicker than the Scottish ’fly guy.

That gave Tandy a handy cushion for the final leg as Scotland’s 100m freestyle Games champion‚ Duncan Scott‚ tried hunting him down‚ cutting that by more than two seconds to just 0.36sec.

Earlier in the evening‚ Tandy finished second in the 50m freestyle behind England’s pre-race favourite‚ Ben Proud‚ in a race that featured three Englishmen and three Australians.

“Performance-wise‚ I would say maybe [one of my] top three‚” said Tandy‚ who finished tied sixth at the Rio Olympics and has scored a couple of good wins in the US.

As usual he was fast off the blocks‚ but slowed a tad a little over halfway.

“I have trained my start a lot. When I come on the breakout‚ I am coming out with a lot of speed and it’s hard to maintain that once I get into my own stroke and rhythm.”

This was the fifth time in six Games that SA has taken a medal in this event‚ with Roland Schoeman having reaching the podium on three occasions and Brendon Dedekind once.

On the bowling green‚ Nozipho Schroeder and Philippus Walker secured a medal after beating Wales 11-9 in a contest that went down to the last bowl.

“That was gut-wrenching‚ to say the least‚” said skip Walker‚ who had to position his wood perfectly to nail down the victory.

But to lift the gold on Wednesday night they will have to get past the favourites‚ Australians Lynne Seymour and Jake Fehlberg.

They met the hosts on the opening day of the Games and were blown away 26-3‚ but the Aussies are beatable‚ having lost to England during the group stage.

Antonio Alkana finished fifth in the 110m hurdles in 13.49‚ slower than his heats effort of 13.32‚ which would have earned him bronze.

“I’m not happy with the time‚” he said afterwards.

“I ran faster and much easier in the heats.

"And also the tension in the final is so much higher‚ everyone wants to bring their A game.

There was little else for SA to enthuse about on the day.

Their last remaining boxer was eliminated‚ and the women’s hockey team lost 0-1 to India for their second defeat in four matches.

Tatjana Schoenmaker announced her bid to become the first South African female swimmer to win a Commonwealth Games medal in eight years as she ...
Sport
3 years ago

Akani Simbine and Henricho Bruintjies will both compete in the men’s 100m final at the Commonwealth Games on Monday night.
Sport
3 years ago

Weightlifter Mona Pretorius made it fourth time lucky as he won Commonwealth Games bronze in the 63kg category on Saturday.
Sport
3 years ago