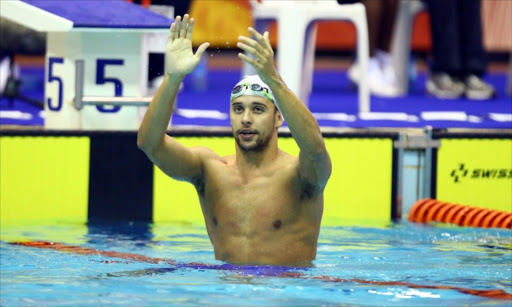 He qualified in the morning heats to set up a mouthwatering clash against the Olympic 400m and 100m champions‚ Australians Mack Horton and Kyle Chalmers.

Also in the mix are Englishman James Guy‚ the 2015 world champion in this event‚ and Scotland’s Duncan Scott‚ who swam the fastest of the morning heats at 1min 46.62sec.

The five heavyweights boast 12 Olympic medals and 18 world championship gongs between them.

There will be casualties; most will be toast in Gold Coast.

Le Clos will race the 200m 19 minutes after the 50m butterfly final and then do the 4x100m freestyle relay at the end of the evening — his first three medal shots in his bid for seven medals at this gala to push his career tally to 19 and become the most decorated Games medallist of all time.

The relay team of Calvyn Justus‚ Ryan Coetzee‚ Jarryd Baxter and Eben Vorster qualified for the final‚ posting the seventh-fastest time in the heats‚ quicker only than Sri Lanka (which is more than 49kg boxer Siyabulela Mphongoshi managed‚ losing on points in his opening bout against Sri Lanka’s Thiwanka Ranasinghe).

Le Clos will come in‚ as should sprinter Brad Tandy‚ to bolster the foursome as they try to earn SA’s fifth consecutive medal in this event since Manchester 2002.

There are other SA medal hopes in the pool on Friday night.

Ayrton Sweeney makes his bid in the 400m individual‚ where he was the second-quickest in the morning behind Australia’s former junior star Clyde Lewis.

And Tatjana Schoenmaker has a chance to become the first SA female to win a Games medal since Delhi 2010‚ although she is an outsider in the 50m breaststroke. The 200m on Saturday is her main race.

Cameron van der Burgh cruised into the evening semifinals of the 100m breaststroke‚ touching in 1:00.20 to finish second behind England’s James Wilby (59.80).

Olympic and world champion Adam Peaty‚ also of England‚ set the pace in 59.14.

In the lawn bowls there have been two SA defeats already‚ Colleen Piketh losing her singles match against Australian Karen Murphy 16-21 and the men’s triples doing down 13-24 to England after edging Papua New Guinea 16-15 earlier.

SA weightlifter Mona has a sweet tooth and taste for success

Weightlifter Mona Pretorius is mixing her sweet tooth with a desire to taste success at her fourth Commonwealth Games in Gold Coast.
Sport
3 years ago

Henri Schoeman clinched South Africa’s first medal of the Commonwealth Games on Thursday afternoon as he surged in the run to take the triathlon ...
Sport
3 years ago

Three of SA’s Paralympic champions feel like they are on par with their able-bodied comrades at the Commonwealth Games‚ sporting a record number of ...
Sport
3 years ago
Next Article