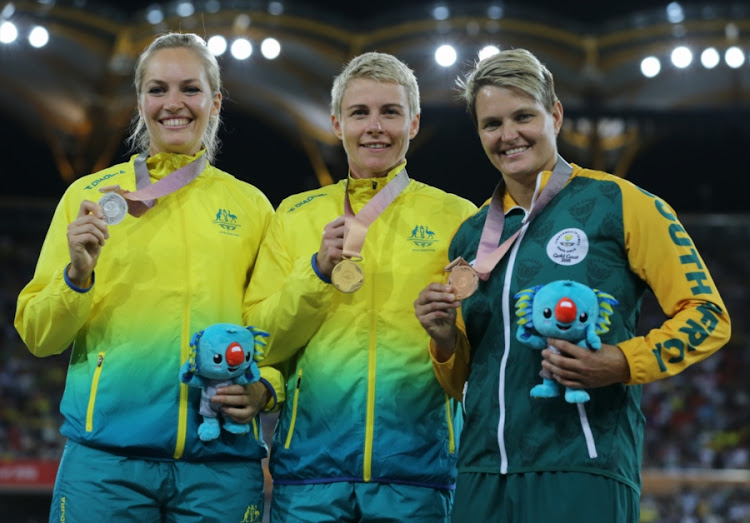 Sunette Viljoen won the fourth Commonwealth Games medal of her career on Wednesday‚ merely weeks after a debilitating back injury that had prevented her from even throwing.

Viljoen‚ the champion at Melbourne 2006 and Delhi 2010 and runner-up at Glasgow 2014‚ took the javelin bronze behind Australians Kathryn Mitchell and Kelsey-Lee Roberts.

Mitchell effectively sealed the competition on her first attempt as she launched a 68.92 personal best that also stretched the Games record by nearly three metres.

Viljoen’s 62.08m opener was her best effort too‚ and it kept her in second place until the final sixth round when Roberts bumped her down to third place with a throw of 63.89.

But the South African was beaming‚ having got through her first international competition pain-free for the first time since mid-2017. Her first competition back was in Sasolburg in late March.

“Three weeks before Commonwealth Games … before that I couldn’t throw‚” said Viljoen.

“I couldn’t throw. I went back and forth to doctors and physios. There’s a nerve in my lower back that got pinched. It was so sore.”

Now the South African‚ silver medallist at the last Olympics‚ is thinking long-term and is even eyeing history down the line.

“Slowly but surely it will come back‚ working towards Doha next year the world championships‚ and then it will be my fifth Olympic Games in Tokyo in 2020.”

No South African has competed at five Olympics‚ with only a select few having done four‚ namely Viljoen‚ Hendrick Ramaala and swimmers Roland Schoeman and Ryk Neethling.​

Tatjana Schoenmaker announced her bid to become the first South African female swimmer to win a Commonwealth Games medal in eight years as she ...
Sport
3 years ago

Akani Simbine and Henricho Bruintjies will both compete in the men’s 100m final at the Commonwealth Games on Monday night.
Sport
3 years ago

Weightlifter Mona Pretorius made it fourth time lucky as he won Commonwealth Games bronze in the 63kg category on Saturday.
Sport
3 years ago
Next Article